In troubled DRC, this boy’s feet were amputated after a grenade explosion. © Sven TORFINN

A young patient comes for a TB test at the MSF clinic in Homa Bay, Kenya. © Olga OVERBEEK

A woman attends an antenatal consultation at a hospital supported by MSF in Nigeria. © Olga OVERBEEK / MSF

A nurse covers a patient suffering from chills with a heating blanket in MSF’s cholera treatment centre in Sierra Leone. © Holly PICKETT

Zimbabwe is one of the countries worst affected by the dual epidemics of HIV and TB. © Brendan BANNON

In South Sudan, MSF staff measure refugee children’s height and weight to determine if they are malnourished. © John STANMEYER/VII 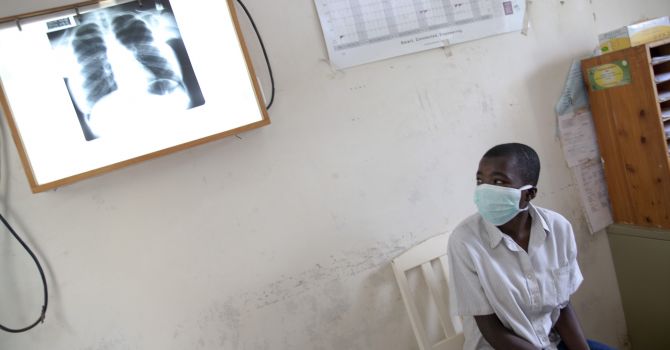 MSF has for a number of years devoted a significant portion of its resources to the country, which continues to be tormented by conflict and deprived of health care. Escalating violence in the east has increased the already high level of medical need.
In provinces of North Kivu, South Kivu, Orientale and Katanga, MSF provided comprehensive healthcare, including nutritional care and maternity services, to victims of conflicts. But as just one example of many insecurity incidents that limited our medical activities, in South Kivu, MSF staff who had been working in six health centres were evacuated in February due to armed conflict, though MSF continued to supply the facilities with medicines.
There is also substantial work with some of the most threatening diseases. Three-quarters of all reported cases of sleeping sickness (human African trypanosomiasis) are in DRC and in Bas-Uélé district alone MSF worked with Ministry of Health staff in the hospital and in mobile teams, screening some 60,000 people for sleeping sickness and treating 1,070. MSF also responded to measles, cholera and Ebola outbreaks, and provided antiretroviral (ARV) treatment in different areas in the country.
In 2012, MSF provided over 1.6 million outpatient consultations, treated 434,300 patients for malaria, admitted over 90,000 patients to hospital and vaccinated 407,600 people against measles across the country.

MSF treated more than 23,000 children for severe malnutrition in different areas of the Sahel strip, in the north of the country. Immunisation rates are very low and Chad is regularly affected by outbreaks of preventable diseases like meningitis, which increase the exposure of children to malnutrition. MSF was heavily involved with vaccination and treatment during the outbreaks.
On malaria, in the Mandoul region, MSF treated 39,500 people and trained staff in local health centres. A new preventive strategy of distributing antimalarial medicines was also implemented, achieving a 78 per cent reduction in number of patients. MSF also runs specialist services for women and children and helped refugees from the neighbouring Central African Republic.

Located in northeastern Kenya, Dadaab is the largest refugee complex in the world. The population, mainly Somalis fleeing conflict and drought, is approaching half a million. In one part of that complex, MSF conducted an average of 14,000 consultations and admitted 1,000 patients each month. Since July, following several security incidents targeting aid workers, MSF international staff could no longer work in Dadaab on a permanent basis.
Elsewhere in Kenya, MSF provides care to over 10,500 people living with HIV/AIDS and runs a tuberculosis (TB) programme in Homa Bay. In Nairobi, MSF continues to provide medical care to sexual violence victims and run the clinics for HIV and TB patients in the slum areas of Mathare and Kibera.

Insecurity in northern Nigeria is growing, leading to the likelihood of increased violence, displacement and deteriorating health services. In Jigawa state, MSF has been providing obstetric services, including fistula repair surgery for 284 women. Obstetric fistulas are injuries to the birth canal, mostly due to prolonged, obstructed labour. They cause incontinence, which can lead to stigma and social exclusion.
The emergency teams responded to the flooding in the east, and the outbreaks of malaria, measles and cholera in the northwest, treating tens of thousands of patients. MSF has also treated 2,500 children for lead poisoning in Zamfara state since 2010. Political tensions in the Niger Delta region have eased and hence MSF closed the trauma programme in Port Harcourt.

A policy of free healthcare for children under five and pregnant and breastfeeding women was introduced in 2010, but real improvements in access for these groups have not yet been achieved. Many health facilities are understaffed and underequipped. High numbers of preventable maternal and child deaths in the country are a result of a lack of access to healthcare.
In Bo, MSF runs a 220-bed obstetric and paediatric hospital, with an ambulance service transporting patients from nine community health centres and sending those with complications to the capital Freetown. Between July and September, MSF responded to a cholera outbreak in Freetown, treating 5,000 patients across four treatment centres.

The majority of people in Somalia are still living in crisis. Most of the country’s healthcare infrastructure has been destroyed, leaving only one doctor in the country for every quarter of a million people. The nutritional crisis of 2011 in south and central Somalia further caused massive internal displacement as people searched for food and security.
MSF continued to work in areas controlled by government as well as areas held by opposition groups. In and around the capital of Mogadishu, MSF provided basic healthcare through supporting local hospitals and running mobile clinics. MSF also treated malnourished children in displacement camps in Afgooye. In 2012, MSF provided a total of 624,200 outpatient consultations, admitted over 40,000 patients to hospital, treated over 30,000 severely malnourished patients, and conducted 2,750 surgical procedures in 13 areas.

The health system continues to struggle with the dual epidemic of HIV and TB, which are the focus of MSF’s activities. The package of services includes rapid testing, treatment, counselling, prevention of mother-to-child transmission (PMTCT) and medical and psychological support for victims of sexual violence.
An assessment at the maximum security prison in the capital, Harare, indicated that many inmates were suffering from undiagnosed and untreated mental illness. MSF opened a new programme in May to provide patients from Harare and eight other prisons with psychiatric services, psychological consultations and occupational therapy. In Harare, MSF also runs offers free medical care, counselling and referrals for further support for sexual violence victims.

The massive influx of Sudanese refugees into South Sudan caused MSF to launch one of its biggest emergency programmes of 2012. The land is inhospitable: in the dry season water is scarce while in the rainy season it is a flood plain and only accessible by air.
In Maban county, Upper Nile state, an estimated 110,000 refugees in four camps became entirely dependent on humanitarian organisations and in some camps mortality levels had reached double the emergency threshold by July. MSF ran three field hospitals and seven outreach clinics, carrying out up to 8,000 medical consultations per week and caring for people suffering from the lack of food and water and long journeys on foot.
MSF also offered medical assistance in Yida refugee camp in Unity state and managed to bring down the death rates under the emergency threshold by September.
MSF keeps running hospitals and outreach clinics in Jonglei state where brutal inter-communal clashes continue to cause displacement. In other parts of the country, MSF runs projects to offer a wide range of healthcare including surgery, treatment for malnutrition, TB and kala azar.
In 2012, MSF provided a total of 869,300 outpatient consultations, admitted over 46,700 patients to hospital, treated 148,700 patients for malaria and vaccinated 204,800 people against measles. Teams also launched emergency response to the flooding in Yambio and the measles outbreak in Gogrial.
‹ From the President and the Executive Director - MSF-HK Activity Report 2012 up Projects in Asia - MSF-HK Activity Report 2012 ›