A 5-year-old girl whose right arm was amputated plays with an MSF physiotherapist in Kunduz, Afghanistan. © Mikhail Galustov

In Bangladesh, an MSF staff weighs a child to help determine its level of malnutrition. © Alfons Rodriguez

A health promotion session for patients in an MSF clinic in Chhattisgarh, India. © Sami Siva 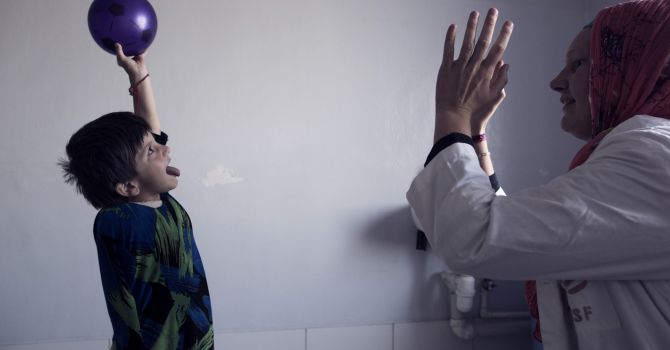 Afghanistan
The number of people receiving critical medical care at MSF hospitals has nearly doubled over the last two years, a clear indication of the medical needs in the country.
In eastern Kabul, MSF has been upgrading Ahmad Shah Baba hospital and has trained Afghan staff to provide emergency and maternity services around the clock. There were approximately 1,000 births every month. MSF also launched mobile clinics to assist displaced people in six camps.
In the northern province of Kunduz, the MSF trauma centre continued to provide free surgical care to victims of general trauma such as traffic accidents, as well as conflict-related injuries like gunshot wounds. Staff treated a total of 17,000 people and performed 4,500 surgical procedures, three times more than in 2012. Mental health programme was launched to provide psychological support to patients and families coping with traumatic events and bereavement.
The MSF maternity hospital in Khost, the only specialised maternity hospital in the area, assisted in the delivery of 12,000 babies and helped more than 2,000 women who had complications during pregnancy or labour in 2013. In Helmand province in the south, with MSF support, the Boost hospital treated a total of 66,000 patients in the emergency room, performed 5,600 surgical procedures, and treated 3,200 malnourished children.
Bangladesh
More than 200,000 people of Rohingya ethnic and religious minority have escaped to Bangladesh from Myanmar over the past four decades and are losing hope of ever returning home. At Cox’s Bazar, MSF continues to provide comprehensive medical assistance for both the host community and the 30,000 unregistered Rohingya in the makeshift camp at Kutupalong.
In the capital, Dhaka, half a million people live on the bank of the Buriganga River in the city’s largest slum, with very little access to the healthcare system. An MSF team runs a health centre there, providing free, basic healthcare, and sexual and reproductive health services to young women. MSF also provided mental health support to survivors and rescuers of a collapsed factory building in subdistrict of Dhaka in April.
Cambodia
The prevalence of TB in Cambodia is the one of the highest in the world. In 2013, the MSF-supported TB department of Kampong Cham provincial hospital became fully operational, offering detection, diagnosis and comprehensive care for patients. MSF also supports the DR-TB treatment in Phnom Penh and Kandal provinces.
The other issue MSF is working on is malaria. A baseline survey was completed looking at the percentage of inhabitants in Preah Vihear district with artemisinin resistance. A specific treatment protocol will be developed to demonstrate that resistant malaria can be eliminated.
The TB and HIV projects in two Phnom Penh prisons were handed over to national programmes and local partners in June as a result of improvements in care.
China
In china, some regions and departments are not sufficiently concerned with HIV, and there is still widespread discrimination and stigma. A Chinese NGO, Aids Care China, is developing quality care and treatment through private clinics. In September, MSF started supporting one of them near the China–Myanmar border in Jiegao, Yunnan province, where there are high numbers of Chinese and Burmese injecting drug users with HIV or HIV–TB and HIV–hepatitis C co-infection.
In August, more than 127,000 people were affected by flooding and a landslide in Guangxi province. MSF distributed hygiene kits, buckets, plastic sheeting and mosquito nets to 950 households.
India
Healthcare remains difficult to access for India’s most isolated and marginalised populations. Longstanding, low-intensity conflict in Chhattisgarh and Andhra Pradesh has led to displacement and reduced access to healthcare. MSF is running clinics there. While in Mumbai, MSF continued to provide treatment for patients with HIV and co-infections who have been excluded from government health services. DR-TB is also a target.
Decades of conflict in Kashmir have taken a toll on people’s mental health, and needs persist for psychological support. A well-established MSF mental health programme continued at five fixed locations. And in Bihar state, the parasitic disease kala azar is being tackled with newly developed combination drugs.
Myanmar
While violence and segregation continue in Rakhine state, more than 100,000 people remain displaced, living in appalling conditions in camps. MSF is striving to overcome significant obstacles to provide free, high-quality medical assistance to those most in need. Throughout 2013, MSF continued to urge the government and the communities of Rakhine to work together with international organisations to ensure that all patients could access the necessary care, regardless of their background or ethnicity.
MSF runs HIV and TB programme in Yangon, in Kachin and Shan states and in Tanintharyi region. It is the largest provider of HIV/AIDS care in Myanmar, treating over 33,000 patients in a country where fewer than one in three people who need antiretrovirals receive them.
Pakistan
MSF runs projects in north-western tribal areas which are exposed to violence due to government military operations against Taliban. MSF supports the local health facilities, providing medical care to the affected communities in Kurram and Bajaur agencies, as well as nearby Hangu district.
In Lower Dir, there was a dramatic increase in patient numbers in the emergency and resuscitation rooms at Timergara district hospital. More than 100,000 patients came to the emergency room, an increase of 33 per cent over 2012, with more than 20,000 patients treated in the resuscitation room. In Karachi, MSF provides emergency obstetric services and mental health support to undocumented migrants in a slum. A range of medical care is also provided in Balochistan province which hosts many Afghan refugees and has some of the country’s worst healthcare indicators.
‹ Projects in Africa - MSF-HK Activity Report 2013 up Projects in Europe, Middle East and Americas - MSF-HK Activity Report 2013 ›