A displaced child is waiting for water distribution in Hajjah province. © Narciso Contreras/MSF

Dr. Karina Marie Aguilar from the Philippines on her fifth and worst deployment to Yemen. © Benoit Finck/MSF

In Yemen, MSF teams often need to manage “mass casualty incidents” in which patients are all arriving at once. © Guillaume Binet/MYOP 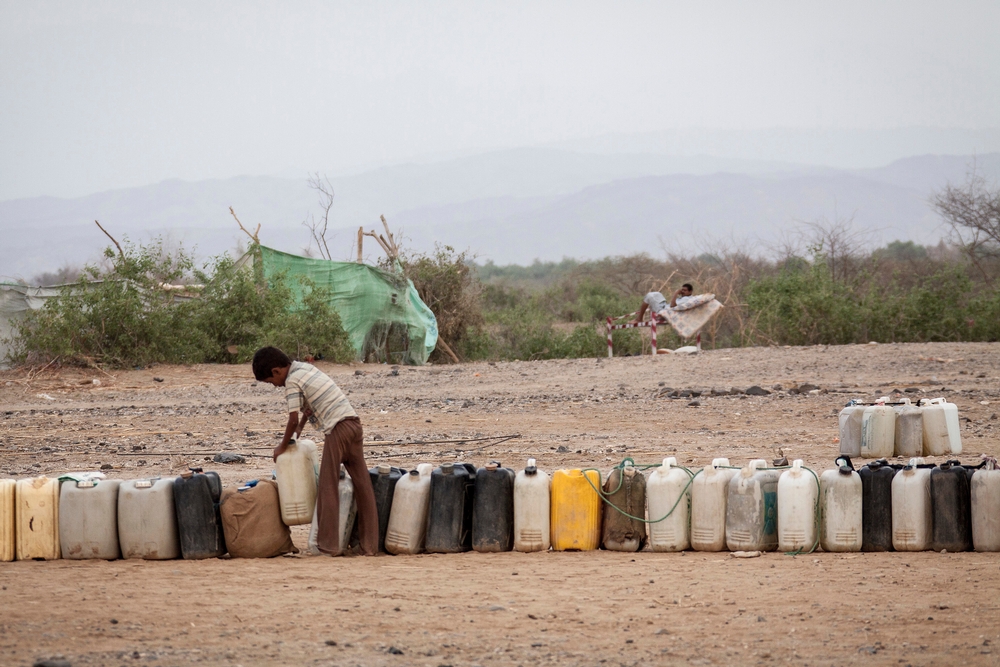 The refugee crisis sweeping Europe has drawn world attention back to its origins in the Syrian conflict, which is already in its fifth year. However, to the south of Syria, on the other side of the Arabian Peninsula, another humanitarian catastrophe created by brutal war is unfolding but  even more neglected.
In Yemen, the fighting that erupted at the end of March between a range of armed belligerants displaced more than one million people and injured or killed tens of thousands. People have not been able to get medical care as most health facilities have been destroyed, shut down or  run out of medicine. Ongoing airstrikes and roadblocks made the situation even worse. MSF teams are working in eight governorates in Yemen and have treated more than 10,000 war wounded as of August 2015. We have seen the disproportionate price civilians are paying in this conflict.
Nowhere to hide from the fear of airstrikes
Christine Buersser, MSF’s field coordinator in Yemen, felt the threat of airstrikes on the day she arrived in Qataba, the southwestern part of the country. Each time a bomb hit near the hospital where she lived and worked, she could feel the ground shake. “During the strikes, the women and children huddled together in the hospital corridor, some of them crying. Other patients left the hospital when the bombing started, either to check on family members, or because they were afraid the hospital would become the next target. ” The team has been receiving seriously injured patients day and night. They were also working hard to reinforce the hospital building with sandbags and bring in more medical supplies.
"I had never heard such explosions in my life,” said a nurse working in the MSF hospital. “Now I start shivering and trembling even when I hear a gunshot or any sound of explosions.”
26-year-old Jasmin Mohammed Ali, a primary school teacher, said the school was affected by the airstrikes as it is close to the central security office. The explosions terrified her and the children. Since the conflict erupted, Jasmin and her sister have been thinking of leaving the town but they have 26 family members living in one house, “We don’t know where to go.”
The hardships of life without essentials
It is tough to make a living as petrol, medicine, water and food is in short supply during the conflict. MSF teams have witnessed pregnant women and children dying after arriving too late at the health centre because of petrol shortages or roadblocks.
Dr. Ali Dahi, who works for MSF, said, “There are severe shortages of fuel and electricity, which also means a shortage of water, as it cannot be pumped.... we need to get more supplies in.” The main water facility for the town where Jasmin lived stopped working due to fuel issue. She had to walk to another well and this trip usually takes three to four hours on foot. Unfortunately, this borehole wasn’t working either because of the fuel problem.
Food shortages are also a grim reality for people in Yemen. In the main city, Aden, the price of flour has increased by 70% in some areas and meat is all but non-existent.  Data collected by MSF in two other areas show that 15% of children are undernourished.
Civilians in Yemen are now trapped in double suffering, as continuous fighting brings heavy casualties and the shortage of supplies makes life nearly impossible. MSF has been urging warring parties to stop the indiscriminate bombing and the targeting of civilians, and to ensure humanitarian assistance can reach people in need across the country.
Doctors under stress
Dr. Natalie Roberts from the United Kingdom worked in an emergency room of a health centre that MSF has been supporting in north Yemen. Since the conflict started she and her colleague have been seeing 40-50 wounded patients a week. ”Usually every time I come here there is blood all over the floor and there are injured patients lying on all the beds.” The team is often trying to manage a “mass casualty event” of four, five, six or even seven wounded patients all arriving at once. After a busy day, she was still wide awake lying on the bed with the mosquitoes buzzing around and the sound of anti-aircraft fire.
Dr. Karina Marie Aguilar, an anaesthetist from the Philippines, had been deployed to Yemen four times by the MSF-Hong Kong office, but this fifth assignment in Yemen was the worst year she had seen. MSF runs a 50-bed capacity Emergency Surgical Unit in Aden but since the conflict in March, the facilities have been overstretched and the number of patients at any given time ballooned to more than a hundred.
“The influx of patients forced us to double the capacity of the hospital with some patients recuperating on mattresses in our meeting room and one physiotherapy room was hastily converted into the inpatient ward,” she said.
“Yemenis need OUR help,” Dr. Aguilar stressed, “They live day by day without food, fuel, electricity and water. The medical needs of the civilians and the fact that ours is the only hospital fully functioning in Aden during the war kept my team going. ”
‹ Remember the forgotten war - Borderline: Yemen:Misery Under Fire up Worldwide Work - Borderline: Yemen: Misery Under Fire ›