In a hospital in Damboa, Borno State, a mother was taking care of her child who was infected with measles. Malnourished children are prone to diseases as their immune system cannot fight infections. © Ikram N'gadi

< >
Nigeria: Escaped…...but still no escape
Borno state in northeastern Nigeria, West Africa, has been the main battleground between Boko Haram and the Nigerian armed forces in the past few years. At the same time, the state has a severe lack of food1. MSF teams witness people being displaced by the conflict every day and then having to live in camps, trapped under military control or those of different forces. They have to rely on external aid to provide them with essential food and medical care. However, lots of areas in Borno State are still inaccessible to aid organisations because it is too dangerous to go there. The situation in these places is even more worrying. Bama was once one of the most heavily populated towns in Borno. It has  however been emptied by the prolonged fighting between the Nigerian Army and Boko Haram, except for a camp located inside the compound of a hospital. 11,000 people live there, taking refuge in makeshift shelters made of iron sheeting taken from nearby damaged houses. Most of the residents are women and children. The camp is controlled by the military and everything that the people need, including food, has to come from outside aid. MSF was allowed to visit Bama for the first time last June to evaluate the medical needs. The team quickly screened over 800 children for malnutrition, only to find that 19% of them suffering from severe acute malnutrition. The team also counted 1,233 graves located near the camp, which had been dug in the past year. Of those, 480 were for children. “Bama is largely closed off,” said Ghada Hatim, MSF’s the then head of mission in Nigeria. “We have been told that people there, including children, have starved to death." Around 65,000 people live in an internally displaced persons’ camp in Ngala in the east of Borno. They are in urgent need of food, water and medical care. © Sylvain Cherkaoui/COSMOS
Children are missing
In fact, the whole of Borno is struggling to find enough food. From last July to September, MSF conducted epidemiological retrospective mortality surveys in four locations  we could reach. They revealed that the emergency thresholds of mortality were exceeded, particularly in the under-five population, and that malnutrition rates were excessively high. MSF International President Dr. Joanne Liu visited three places in Borno last November and saw that something was terribly wrong. Normally, when camps are set up for internally displaced people, there are almost always small children buzzing around. But in Borno, children under 5 years of age were missing from the therapeutic feeding centres, the inpatient wards and the outpatient department that she visited. “Where have these children gone?” she wondered. The stories that she heard in Borno were all about how fighting forced people from their homes, and how food shortages then caused toddlers to die from malnutrition, compounded by infections.
Over the past few months, MSF has been able to start to provide medical care and nutritional treatment, and even distribute food, to more places as we gained access. Like other accessible areas in Borno, Bama was given some respite as more aid agencies have been able to come in. With the end of the rainy season, food shortages, malaria, diarrhea and similar problems have declined.
MSF however keeps seeing new arrivals in a number of displacement camps, implying that some areas in Borno are still too dangerous to live. But getting away from them however does not guarantee stability in life. 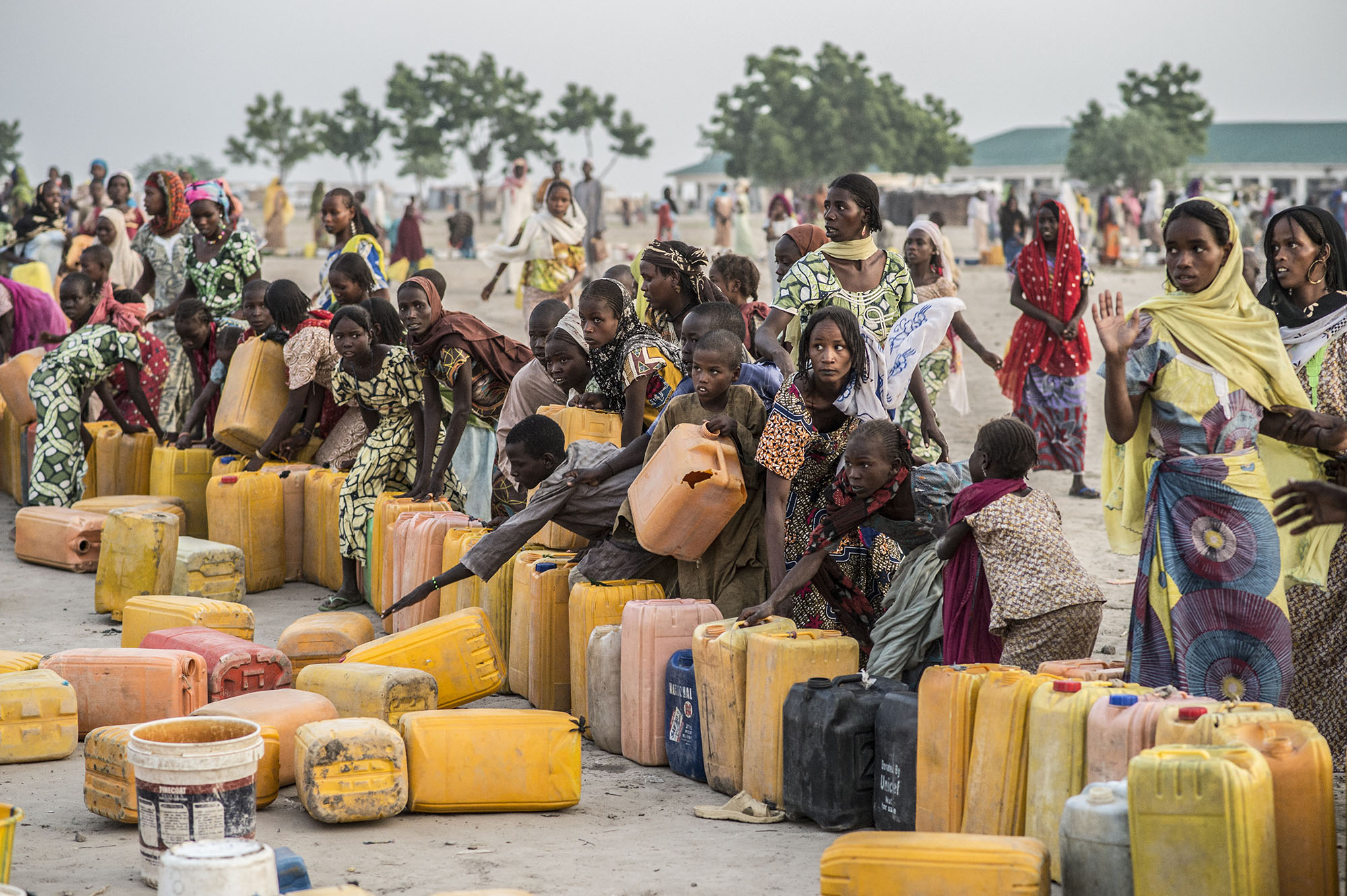 Access to water is a problem in the camp in Ngala. Every morning the camp residents rush to fill their water buckets. © Sylvain Cherkaoui/COSMOS
Gwoza and Pulka in southwestern Borno are both held by the Nigerian army. Displaced people keep arriving in the camps,  while people inside cannot leave. Medical director Jean François Saint-Sauveury was in Gwoza and Pulka earlier this year and he recalls that the people there were totally deprived. Many displaced people had nothing but at the same time it was impossible to cultivate there and leaving the town to collect firewood to cook with was extremely dangerous. They had no choice but to depend on external aid. “In just one day, 500 people arrived in Pulka, mainly elderly, women and children. A camp has been built with some tents, but it has no latrines or water points so the displaced have not occupied it. Hundreds of people have been living for weeks around the health centre run by MSF,” he said. In Borno State, the displaced collect firewood for cooking or selling as their sole source of income. © Ikram N'gadi
What about those places that haven’t been seen yet?
MSF is currently running ten medical facilities in six towns in Borno and regularly visits another six to provide medical care. MSF screened children for malnutrition in multiple towns in Borno from last July to September, to make sure those who needed it got treatment in time. ©Ikram N'gadi
However, the part MSF is able to reach is just a small area of Borno. “MSF still does not have access to many areas  for security reasons and we do not know what is happening,” explained Jean François. What he could confirm is a deteriorated health system caused by the fighting2: primary care is not working well; hospitals are overwhelmed; dramatic gaps are found in emergency care, surgery, transfusions, mental health and suchlike. In some areas, MSF is the only medical organization that provides aid.
MSF calls on the Nigeria authorities and aid organisations to ensure food distributions and free healthcare throughout Borno. We ask that they should not relocate people into areas that are still unstable and without sufficient aid. People should be allowed to choose where to seek safety and when they want to return. MSF took up an unusual role of general food distribution in Maiduguri when no one else could do it. © Aurelie Baumel/MSF
Fleeing with children
“We left our village in Bama one year ago. Our life there was comfortable; we had everything that we wanted. At home we could farm, but here we do not have access to any land.
We left our village because of an attack. We left at night, in such a rush that we took nothing with us apart from our children. We trekked on foot – it took four days to reach Maiduguri. We knew that armed men were patrolling the area so we hid every time we heard a motorbike or a car. We stayed out of sight until we couldn’t hear the sound of the vehicle any longer. Maira Modu (second from the left) is an internally displaced person living in a camp in Maiduguri.© Malik Samuel/MSF
It was really difficult for the children. Two of them fell sick and they have not yet recovered. They have fever, coughing and are stressed. But we are here now and managing with what we have. Most days we only eat once and have to go to sleep with empty stomachs. We have only been given food twice by MSF; otherwise we rely on family members who live in Maiduguri. They give us food not because they have a lot, but because they have human feelings.
It’s very difficult to sleep at night. Nine of us sleep in this shelter and there is not very much space. Some of us sleep outside. We would like a blanket, shelter, food and to go back to our community. We would like people to know about the hardship that we face. Life is difficult for us here. We don’t have water, food or detergent to wash our children’s clothes. At home they could go to school, they had a playground. We know that our home has burnt down, like most of the homes in our village. But we still want to go back when it is peaceful.”
- Maira Modu, 30-year-old, has six children and is now living in a camp in Maiduguri. 1United Nations, 22 February 2017︰http://www.un.org/apps/news/story.asp?NewsID=56223#.WMK8TVV97IU
2According to Borno State Ministry of Health, over 40% of the health facilities are known to be destroyed︰http://www.who.int/health-cluster/news-and-events/news/Borno-Health-Sector-Bulletin-Issue3.pdf?ua=1
‹ From the Executive Director - In the face of suffering up Photo Feature - South Sudanese Refugees in Northern Uganda ›