MSF Knowledge - The Smartphone that save lives

The Smartphone that Saves Lives
The smartphone has become indispensable in our daily life. But now it can also help medical doctors to save more patients in vulnerable situations. MSF teams in Mali are testing new mobile phone technology to help diagnose children with cerebral malaria. This new technology is cheap but effective, and suitable for use in places with few other resources. But the key is helping medical staff to get a quick diagnosis that will lead to appropriate treatment for patients.
MSF’s pediatric department in Koutiala hospital, Mali, sees huge numbers of children under five with severe forms of malaria, many of whom have cerebral malaria. This form of the illness can lead to serious brain damage and even death if not treated properly. Some child survivors of cerebral malaria have an increased risk of neurological and cognitive deficits, behavioural disorders, and epilepsy. However, as MSF tropical medicines advisor Estrella Lasry explains, “The problem is that cerebral malaria can be easily confused with other diseases, such as meningitis. MSF was seeing an increase in the number of children with suspected cerebral malaria, but with the limited diagnostics available in the front lines, we couldn’t be sure which disease they had.” This three-year-old girl suffering with severe malaria and the complication of severe anaemia is receiving treatment in the paediatric ward of Koutiala hospital. © Yann Libessart/MSF
In Koutiala and many other places where MSF works, complicated examinations such as brain biopsies are not plausible. But actually, the retina is like a mirror of what is happening in the brain.  With cerebral malaria, the retina can undergo certain visible changes, known as malarial retinopathy, which are   hemorrhages, white patches and abnormal vessels. So cerebral malaria can be diagnosed by identifying these changes.
The difficulty is that the usual tools for looking at a patient’s retina are fancy and expensive, along with an ophthalmoscope or well-trained technicians. But they are rarely available in the field. MSF knew that it needed a better tool at the bedside. When one of the pediatricians heard about the “PEEK” (standing for “portable eye examination kit”), they realized that this could be just what MSF was looking for. PEEK was developed by scientists at the London School of Hygiene and Tropical Medicine and the University of Strathclyde. The best things about PEEK are that it’s simple, cheap and accessible. And with a few days’ training, it can be used just as effectively by a non-specialist doctor. PEEK includes a sleeve that can be put on the smartphone. It channels the light and focuses automatically on the retina while the phone is taking pictures. An app that comes with it can store the patient’s notes on the phone.  The doctor can examine the image with their colleagues, or email it to other experts for a second opinion.
The prototype is still being approved. MSF hopes to use it wherever there are high numbers of children with cerebral malaria, which is mainly in countries in East and West Africa. Some other diseases- such as diabetes and HIV-are also associated with changes to the retina, so MSF really hopes to be able to use PEEK for these patients too.
How does it work? 1. Fit the PEEK sleeve onto the phone. 2. Shine the inbuilt light  at the patient’s dilated pupil. 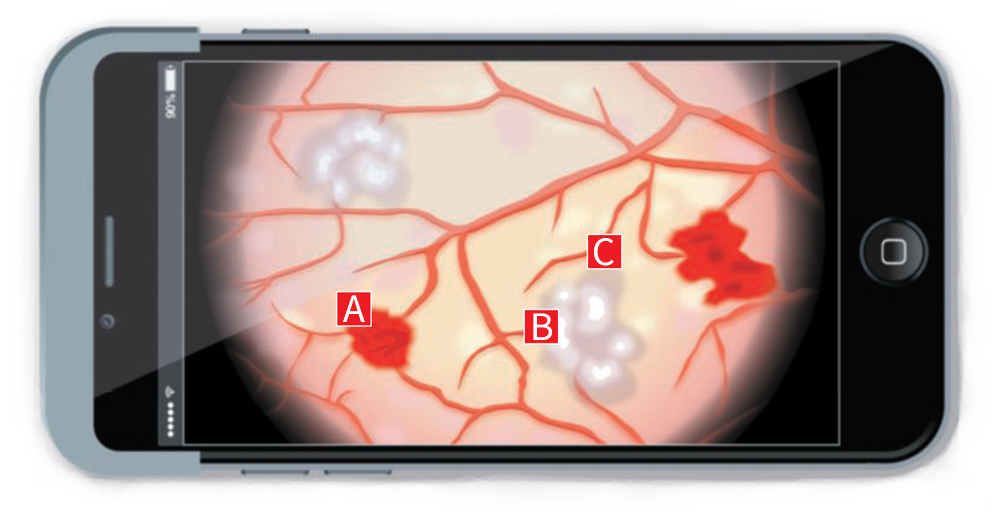 3. The images are recorded and stored on the phone for identifying malarial retinopathy :
A--Haemorrhages – caused by the red blood cells sticking together and not allowing microcirculation.
B--White patches
C-- Abnormal vessels – caused by malaria parasites sticking to the lining of the small blood vessels in the brain and eyes where they disrupt the supply of oxygen and nutrients
Illustrations： Ian Moores
‹ Photo Feature - South Sudanese Refugees in Northern Uganda up Frontline Sharing - Back to Khost : Embracing the good and the bad ›