Cover Story － Diphtheria: A Disease of the Past Poses a New Threat

Diphtheria is spread from one person to another. It often causes fever, a sore throat and the buildup of sticky grey-white membrane in the throat or nose which can result in dyspnea and nerve damages. ©Mattias Ohlson

Diphtheria: A Disease of the Past Poses a New Threat

Diphtheria, a contagious and potentially fatal bacterial infection, has been eradicated from most countries after systematic childhood vaccination campaigns over the past thirty years. Yet, humanitarian crises like population displacement and war have caused this neglected and forgotten disease to rage again.

Since late August 2017, nearly 700,000 Rohingya have sought refuge in Bangladesh following increased violence in Myanmar. The population of the border town of Cox's Bazar has grown exponentially within half a year. The refugees are living in over-crowded, precarious makeshift settlements, with shelters squeezed up against each other. Sometimes families with up to 10 people live in one very small space. This provides ideal conditions for disease outbreaks.

In early November , MSF teams there identified the first suspected case of diphtheria. Crystal VanLeeuwen, MSF emergency medical coordinator for Bangladesh was very surprised when she received the news. “‘Diphtheria?’ I asked the doctor calling me, ‘Are you sure?’ When working in a refugee setting you always have your eyes open for infectious, vaccine-preventable diseases such as tetanus, measles and polio, but diphtheria was not something that was on my radar,” said VanLeeuwen. During the outbreak of diptheria in Bangladesh, MSF ran 3 dedicated health facilities and treated the patients with antitoxin. © Anna Surinyach

Diphtheria is a contagious bacterial infection that often causes the buildup of sticky grey-white membrane in the throat or nose. The infection is known to cause airway obstruction and damage to the heart and nervous system.

The disease is vaccine-preventable. For instance in Hong Kong, the government began the “Hong Kong Childhood Immunisation Programme” in 1960s, providing a range of free vaccinations for children up to the age of  twelve  That includes diphtheria, tetanus and acellular Pertussis & Inactivated Poliovirus Vaccine (DTaP-IPV Vaccine). The successful implementation of the programme relies on the comparatively well -developed healthcare system in the city.

The resurgence of diphtheria in Bangladesh highlights how vulnerable Rohingya refugees are. The majority of them are not vaccinated against any diseases, as they had very limited access to routine healthcare, including vaccinations, back in Myanmar. Coupled with the very cramped living conditions and poor hygiene in the refugee camps, as soon as the first case appeared, the disease, which is spread by respiratory droplets, turned into an outbreak.

A few months before diphtheria raged in Bangladesh, a suspected diphtheria outbreak took hold in Yemen. The last diphtheria case there was recorded in 1992, and the last outbreak in 1982.

“The ongoing war and the blockade on supplies including medicines and vaccines are sending Yemen’s health system decades back in time. The healthcare infrastructure is in tatters. The blockade on fuel has meant that patients cannot afford to travel to the very few health centres still operating across the country,” said Marc Poncin, MSF’s emergency coordinator in Ibb.  “This is crucial, because if people infected are unable to access treatment regularly, diphtheria can spread in the body and be fatal in up to 40 per cent of the cases. What is more, the country was barely recovering from a massive cholera outbreak, with over one million suspected cases,”

The Rohingya and the Yemeni population have been through so much trauma – war, violence, forcible displacement – and they were just hit by a disease that is completely preventable with only basic access to healthcare and a routine vaccination that was invented over 90 years ago. 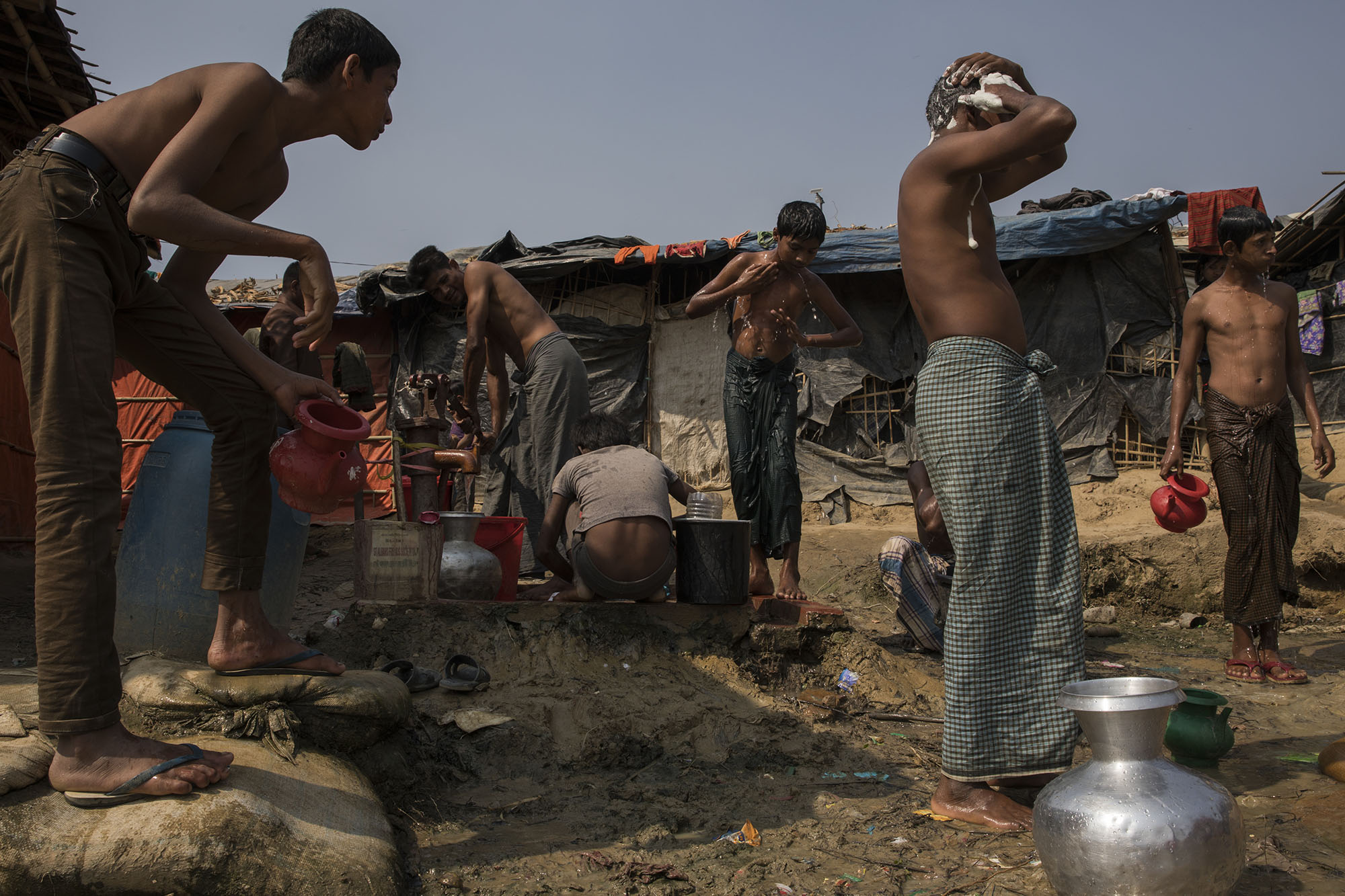 The Jamtoli makeshift settlements are packed with overcrowded populations and poor sanitation condition which provide a favorable condition for the spread of diseases. © Anna Surinyach MSF outreach teams conduct health promotions in the communities affected by the outbreak. They provide people with information on how the disease is being transmitted and how to prevent it, in order to prevent the epidemic spreading further. © Sara Creta/ MSF

“We had to learn around the clock how to treat diphtheria”

With the last major outbreak happening decades ago, most MSF staff had only seen diphtheria in textbooks. Teams in Bangladesh confronted a lot of challenges in treating the disease.

“When diphtheria broke out in December 2017, the MSF team was completely overwhelmed. Given the urgency of the situation, we decided to put the construction of a brand new hospital on hold and focus on setting up a diphtheria treatment centre in the hospital grounds. Initially housed in a series of tents, the treatment centre was later moved into several of the completed wards,” said Carla Pla, MSF Medical Team Leader.

“In those early weeks, it was difficult to manage. Patients were arriving all at once, sometimes in minibuses, and at the same time our staff were not very experienced. We had only seen this in textbooks, but never experienced anything like this before. The last outbreak of diphtheria happened decades ago. We had to learn around the clock how to treat patients for diphtheria.”

“Once the diagnosis is confirmed, the most delicate part of the treatment is administering diphtheria antitoxin (DAT). The medication is given intravenously and can produce adverse reactions leading to complications, and even death, if not well managed. One-to-one patient-clinician care is necessary, particularly at the start, because you have to detect side effects quickly to be able to address them.”

DAT can effectively reduce the fatality rate of diphtheria.  But there is a global shortage of DAT, with less than 5,000 vials available currently. It becomes an ethical and equity question when there is not enough life-saving medication to treat all patients, and MSF medics are often left to make extremely difficult decisions.

Other challenges are to ensure that patients are isolated to prevent the disease from spreading, and identify everyone with whom the patients have been in contact to provide vaccinations and prophylaxis

Apart from providing treatment, it is equally important to vaccinate the population to halt the transmission. MSF has supported the Bangladeshi Ministry of Health to carry out a diphtheria vaccination campaign. This campaign poses more logistical and technical challenges than the previous ones for cholera and measles, as it requires a course of three vaccines administered one month apart.

‹ From the Executive Director - Prevent where you can, cure where you can't up Photo Feature － Behind the Conflict in Yemen ›