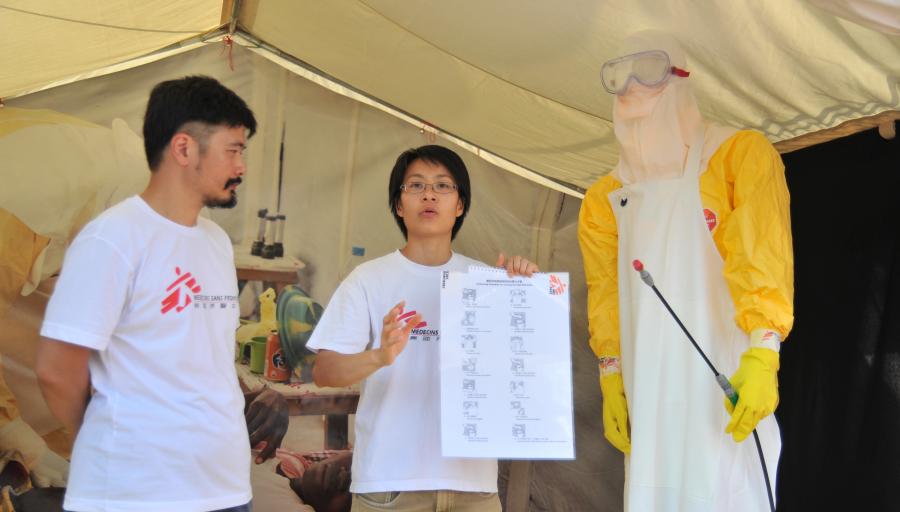 PK Lee, Communications Manager of MSF-Hong Kong who has been to Ebola project in Sierra Leone, explained the importance of medical staff taking care of Ebola patients to follow strictly all infection control measures, including following all specific steps strictly when putting on and taking off the Personal Protective Equipment (PPE). © Waito Lee/MSF Dr. Fan Ning, Vice President of MSF-Hong Kong, shares his experience of dealing with mass casualty incident at the triage of a front line emergency room in Libya. © Waito Lee/MSF Dr. Fan Ning, Vice President of MSF-Hong Kong, says so far MSF-Hong Kong has raised HKD7.5million for the Ebola emergency response while the target is to raise HKD12 million. He hopes the Hong Kong public can pay more concern to the situation in the West Africa and continue to donate to support MSF response there.© Waito Lee/MSF

The Ebola outbreak in West Africa shows no signs of stopping, as latest figures reveal that the virus has led to around 9,000 infected cases and more than 4,500 deaths. To give Hong Kong people a glimpse of the challenges field workers on the front line are facing, Médecins Sans Frontières (MSF) is organising a large-scale outdoor exhibition Emergency Assignment with an Ebola Treatment Centre here in Hong Kong.
The exhibition will be launched on 21 October (Tuesday) and tour around five locations in Hong Kong, with the first stop in the Piazza of Kowloon Park. Three tents of different emergency settings will be set up, including an Ebola Treatment Centre, a frontline triage in the emergency room of a conflict setting, and a maternal and nutrition ward, with exhibits of items that MSF is really using in emergency projects. Visitors can follow the audio guide and experience how MSF works to provide the much needed care to its patients.
MSF-Hong Kong Vice President, Dr. Fan Ning, hopes that visitors can learn more about the ongoing humanitarian crises around the world through the exhibition. While the Ebola epidemic has been widely reported by media recently, the focus is mainly on infected medical staff in developed countries. But the situation in West Africa, where the epidemic first broke out, should not be neglected either. "The outbreak is still not yet under control in the most affected countries. We are in uncharted waters as it is unpredictable and constantly evolving. Though some states have started committing assets and personnel to the affected region, progress is slow."
MSF-Hong Kong so far has sent two field workers （from Hong Kong and Philippines） to Sierra Leone and Liberia respectively for the Ebola emergency response. Another field worker from Hong Kong is going to Sierra Leone later this week. MSF-Hong Kong has raised over HKD$7.5 million for Ebola emergency response while the target is HKD$12 million. The estimated budget for MSF's activities on the West Africa Ebola outbreak until the end of 2014 is 46.2 million euros. MSF currently has more than 270 international and over 2,900 local staff working on the ground. So far the teams have received over 4,500 patients, of which more than 2,700 are confirmed patients, and around 1,000 patients have been recovered and discharged.
Having worked in conflict areas in Gaza and Libya, Dr Fan highlighted the importance of triage system, particularly in conflict settings. Triage allows medical staff to identify the most urgent patient cases and provide the life-saving medical care when there is an influx of injuries after an attack or bombing.
Emergency Assignment will last until 21 November. The Cantonese audio guide, which features artistes Denise Ho, Joyce Cheng and theatre actor Joey Leung, will bring visitors to three emergency settings in a 30-minute journey. Visitors can try on the Personal Protective Equipment for Ebola outbreak and taste the Ready-to-Use Therapeutic Food in specific time slots.
Details of the exhibition as follows:
21-26/10
Piazza, Kowloon Park
12nn – 8pm
27/10 – 5/11
Jockey Club Creative Arts Centre (JCCAC), Shek Kip Mei
12nn – 8pm
7/11 – 12/11
Edinburgh Place, Central(open space outside City Hall)
12nn – 8pm
(Time slots for the above three locations to try Personal Protective Equipment and Ready-to-Use Therapeutic Food: 1pm, 4pm & 7pm)
15 – 16/11
The Square, Hong Kong Science Park
11am – 6pm
18 – 21/11
The University of Hong Kong(open space in front of the Main Building)
11am – 6pm
(Time slots for the above three locations to try Personal Protective Equipment and Ready-to-Use Therapeutic Food: 1pm & 4pm)
More details on exhibition website: http://msf.hk/ea30