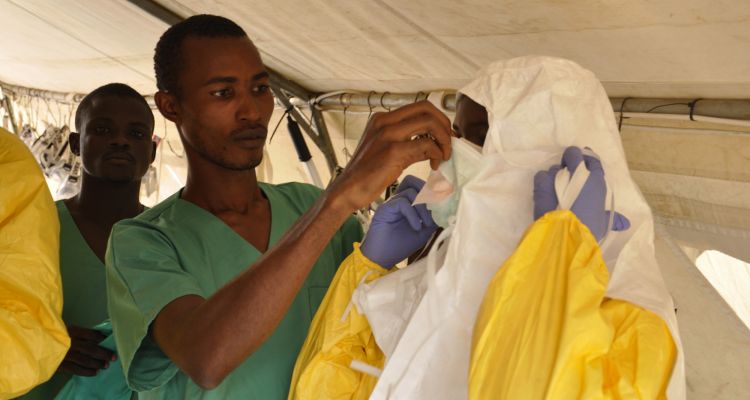 < >
Interview with MSF epidemiologist Kamiliny KALAHNE
What is Ebola?
Ebola is a disease caused by a filovirus – which just means a thread-type virus. It’s a virus that we think has been around for a long time. There is good evidence that it lives in bats, and people generally come into contact with it through direct contact with bats or though sick monkeys or forest animals that have had contact with bats.
The reason why people are scared of it is that when there is contact between humans and sick forest animals, people can get infected – although this does not happen often. But when people do get infected, they become very sick and then they can transmit the infection to their families and to health staff. Once people are infected, there is no specific treatment we can give, and there is generally a very high mortality rate, so a lot of people who become infected die. That is why there is so much interest in Ebola.
How easy is it to pass on this virus?
Ebola is not like flu. You can’t get it by sitting next to someone on the bus. People who become sick with it almost always know how they got sick: because they looked after someone in their family who was very sick – who had diarrhoea, vomiting and bleeding – or because they were health staff who had a lot of contact with a sick patient.
Usually these kinds of outbreaks grow rapidly when there is poor infection control in the hospitals, which allows it to spread. In places where this disease occurs, it’s unfortunate that the hospitals often don’t have a lot of resources: no running water, no basic equipment such as gloves. With running water, soap and gloves, we would really be able to reduce the amount of transmission that occurs in hospitals.
How can people protect themselves from the virus?
People can protect themselves by using what medical people call ‘universal protection’. It is something that we recommend all medical staff do with all patients. You wash your hands before and after you see each patient, so that you don’t transmit disease from patient to patient and to yourself. If there are a lot of fluids – if the patient is very sick, is bleeding or has diarrhoea – you wear gloves and a mask. It is not complicated and it’s what we recommend for managing any disease. Putting those simple things in place would reduce the number of health staff who get sick from this disease when outbreaks occur.
If there is no treatment for this virus, why do we admit patients to treatment centres?
I said there is no “specific” treatment. If you had a chest infection, you could take an antibiotic that would kill that particular bacteria. But in this case, for the filovirus called Ebola, there is no specific tablet we can take. However, in an isolation ward, we can treat people, give them very good pain relief and give them fluids. We believe that this does make a difference and helps them fight the infection.
It’s also important that people with symptoms go to the treatment centre so that they can be looked after, safely, by health staff with experience in managing these cases and who can give them the right treatment with the right equipment, so other people aren’t put at risk of being infected.
What is the risk of the virus spreading to Europe or other developed countries?
We live in a world with planes and lots of people travelling. But Ebola has never been spread to a developed country in that way. This is because people generally transmit the infection when they are very sick, have a high fever and a lot of symptoms – and in these situations, they don’t travel. And even if they do get sick once they travel to a developed country, they will be in a good hospital with good infection control, so they are very unlikely to infect others.
Tags