Damage to one of the hospital’s ambulances. © MSF 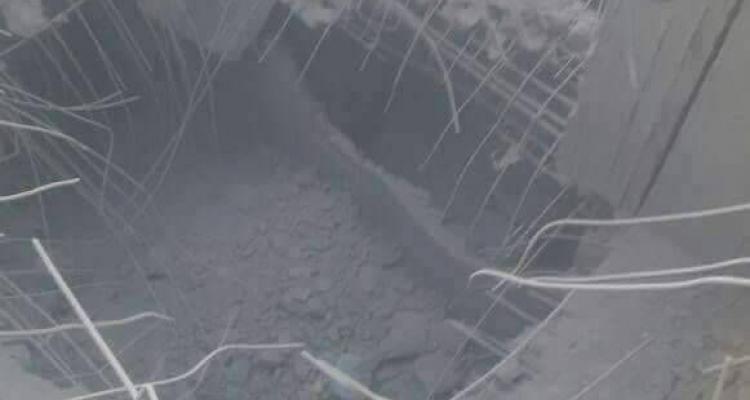 The damage of the bomb penetrated through several floors. © MSF

MSF asks warring parties and their backers not to strike health care facilities
Amid a sharp intensification of bombing over northwestern Syria (mainly Idlib governorate and north of Hama governorate) since Tuesday 19 September, hospitals are closing either because they have been bombed or because they fear being bombed, leaving patients with ever-decreasing options for life-saving care at the time it is most needed said Médecins Sans Frontières (MSF) in a statement today.
The Hama Central/Sham hospital, supported by MSF, was hit by an airstrike at around 6:30 local time on the morning of Tuesday 26 September, putting it out of service but fortunately with no medics or patients killed.
Three other hospitals were hit and put out-of-service on 19 September in Idlib governorate, and two significant hospitals in the district of Jisr al-Shugur evacuated in the night of 27 September out of fear of being bombed. This leaves the remaining medical facilities in the region overwhelmed and struggling to cope with wave after wave of influxes of wounded.
As one of the key referral structures in southern Idlib and northern Hama, the Hama Central/Sham hospital became the only facility in the area still able to do major life-saving surgeries as other hospitals there were damaged or evacuated. Since the strike on Tuesday morning, the capacity for life-saving care is dramatically reduced, a situation repeated through the region.
“We had expected an attack to happen,” said the director of the MSF-supported hospital. “The hospital I manage has been hit by more than 10 airstrikes throughout the different stages since we started it in 2012.”
Six other MSF-supported hospitals and health centers in Idlib and Hama governorates have received a total of 241 wounded from 20 to 27 September; they have also reported 61 dead. One of these hospitals received 99 wounded and reported 21 dead on 20 and 21 September before evacuating all the patients and reducing activities because of concerns about being targeted. The other hospitals remain operational but constantly under the fear of being bombed.
An unusually high proportion of the wounded have been severe cases – 100 severe, 93 moderate and only 48 mild. This would fit with what we hear about patients staying away from hospitals as they fear being bombed there. 129 of these wounded patients (more than 50 percent) are women and children under fifteen years old, indicating that there is a significant civilian toll in the bombings.
MSF has been rushing additional medical supplies to hospitals that are still functioning, to help them maintain core life-saving services. But this assistance can only have limited effect if the facilities are not safe from the ongoing bombings.
“It is demonstrably evident that hospitals are not safe from bombings in Idlib at the moment, and this is outrageous” says Brice de le Vingne, MSF Director of Operations. “Fear is causing hospitals to close or reduce services, and the impact of this will be on all people, the sick, the wounded, pregnant women, everyone who needs healthcare. Under International Humanitarian Law – the ‘rules of war’ – people needing medical care, be they fighters or civilians, must be granted access to such care and the medical facilities treating them cannot be summarily attacked. The fighting parties, and their political and financial backers, must stand by the many commitments they have made in UN Assembly and Security Council resolutions. If the fighting parties and their supporters really wanted to uphold their responsibilities to avoid striking healthcare facilities, they could surely do so.”
Note: While not the primary support organisation, MSF had been supporting the Hama Central/Sham hospital with regular monthly medical supply donations since 2014. MSF directly operates four health facilities and three mobile clinic teams in northern Syria, has partnerships with five facilities, and provides distance-support to 73 health facilities countrywide, in areas where MSF cannot be directly present. No MSF staff are present in supported facilities. MSF’s activities in Syria do not include areas controlled by the IS group since no assurances about safety and impartiality have been obtained from their leadership, nor can MSF work in government-controlled areas since MSF’s requests for permission have to date not resulted in any access. To assure independence from political pressures, MSF receives no government funding for its work in Syria.
Tags