Fighting in Paoua: 13 wounded casualties treated in hospital and thousands of people displaced 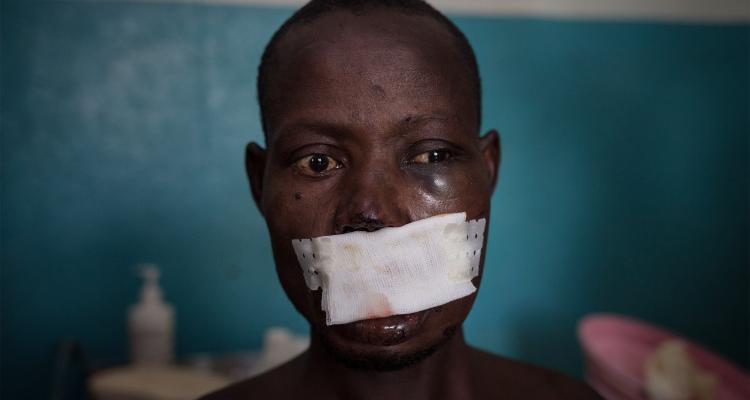 Leonard Gangbe, 33, farmer, is treated at the Paoua hospital in northwestern Central African Republic. He says he was shot in the head while armed men were trying to steal his oxen. ©Alexis Huguet A group of women and children fleeing threats of attacks by an armed group on the town of Betoko, northwestern Central African Republic, meet other women on their way to the town of Paoua. Beda, December 27, 2017.©Alexis Huguet Jope Koromadji, 52, blacksmith, is treated at Paoua hospital, northwestern Central African Republic, after being attacked with machetes and stabbed by armed men in Betoko, 45 km north of Paoua. ©Alexis Huguet A woman and two children flee threats of attacks by an armed group on the town of Betoko, northwestern Central African Republic, towards the town of Paoua. Betoko, December 27, 2017.©Alexis Huguet

All the peripheral health centers are closed and only 13 wounded casualties reached the hospital
The Médecins Sans Frontières team at the Paoua hospital treated 13 victims of the fighting and attacks that began on Wednesday 27 December. “This is very little, taking into account the number of displaced people who reached Paoua and the extreme violence they report to our teams. Many tell of men on horseback shooting at anything that moves, of dead and wounded people left behind in the bush”, explains Gwenola François, MSF head of mission. “We are very concerned by the situation there”.
33 year-old farmer Léonard Gangbe was one of the wounded who made it to the hospital in Paoua. When the fighting broke out, he and several neighbours fled their village to a house in the forest. While trying to stop armed men stealing the cattle he had taken with him, he was shot in the left cheek and the bullet tore through his nose and top lip.
Because of the fighting, Médecins Sans Frontières has been obliged to suspend its work in the seven health centres in outlying districts of Paoua where its teams provide assistance. Three of these centres have reportedly been looted.
A region made vulnerable by persistent violence
The region of Paoua was relatively spared from the fighting and escalation of violence throughout the past year. Yet even where the security is slightly better compared to other parts of the country, people have been subjected to pervasive and sustained violence.
The violence is not only characterised by fighting opposing armed groups, targeted attacks against the population and the numbers of people left dead or wounded. The violence is fostered by the incapacity of state authority to provide security in much of the country and the proliferation of armed men who live off people’s backs. These men use any excuse to impose a tax—happening to be on a particular road, owning cattle, or even living in one’s own home. Josianne Wankian is 37 and mother to nine children. Her story is one such example.
Now living in Paoua, Josianne is from a village a few kilometres from Paoua called Betokomia. At five in the morning on 28 December 2017, she heard gunshots near her home. Her husband and 13 year-old son ran off because rumour had it that, although women don’t get hurt, the men would be killed immediately. So, she was alone with her children when armed men came demanding food and money. Josianne borrowed 12,000 francs CFA (18 euros) from a goat trader so that she and her children could leave their village unharmed and seek refuge with her older sister who lives in Paoua.
This is far from being the first time armed men have demanded money from Josianne and her family. In August 2017, they even torched her home. “My husband’s a farmer. We had four cattle, so we were able to grow more and sell our produce to increase our income,” explains Josianne. “When armed men see a decent house, they demand food, cattle or money. They ordered us to pay a tax of 50,000 francs (76 euros) for our cattle and 120,000 francs (183 euros) just to carry on living in our home. We don’t have that kind of money. I gave them 25,000 francs (38 euros), which was everything I had. As the house didn’t have a roof yet, they said they’d come back when it was finished. But it didn’t stop them stealing our belongings and setting the house on fire. After that, my eight children and I spent several months living out in the fields. We’d just started rebuilding our house in Betokomia when the fighting flared up again a few days ago.”
Like Josianne, 30 000 people or more in the Paoua region have fled neighbouring villages and sought refuge with family in the town that is also becoming less safe. Each local household often hosts over 40 displaced people, and provision of sufficient water and food will soon become an issue.
MSF has been working in Paoua since 2006. The organisation supports the emergency room and paediatric ward of Paoua hospital and ensures access to primary healthcare to children and pregnant women in seven peripheral health centers. MSF now provides medical aid to populations in Bria, Bambari, Alindao, Batangafo, Kabo, Bossangoa, Boguila, Paoua, Carnot and Bangui. Since the beginning of 2017 that saw an escalation of armed conflict, MSF had to adapt several of its programs to respond to the urgent needs of populations directly affected by the violence.
Tags