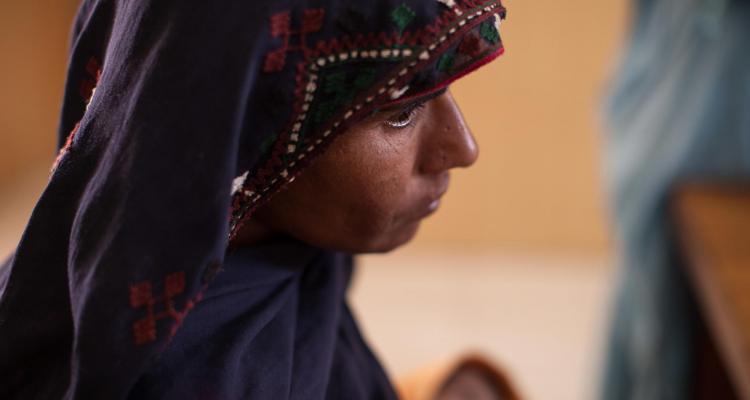 A mother waits to have her malnourished twins seen by the medical staff at the MSF clinic in Usta Muhammad, Balochistan©Khaula Jamil 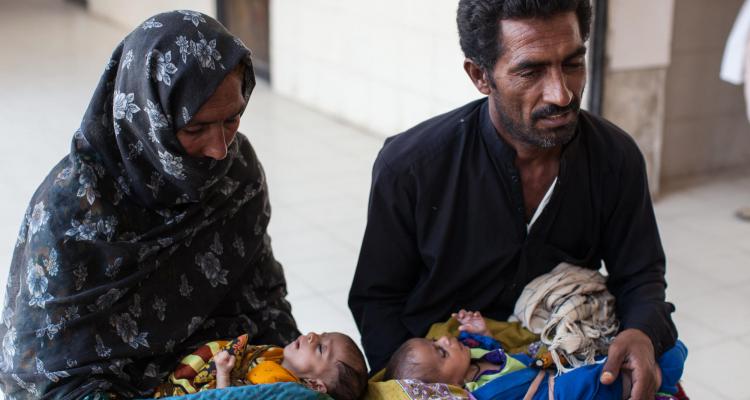 Arish was born in October 2018 at the MSF birthing unit in Chaman District Headquarter (DHQ) Hospital, Balochistan. He was discharged in good health.  Just four days after his birth, however, he was back at the hospital in severe distress.
His mother, Malaika, was unable to produce enough milk to feed him. “When I couldn’t feed him, I gave him green tea instead. My mother-in-law said it was the best thing to do and that’s also what I had done with my other eight children.”
Green tea and black tea can be harmful for newborn babies. Their fragile digestive systems cannot handle the acidity. However, it is common practice in Naseerabad and Jaffarabad districts to feed them these. Malaika noted that in the past her newborn children would fall ill after she gave them green tea and some of them developed pneumonia, but that they recovered.
“You would be surprised by how common such cases are,” says Dr. Zialullah, who works at MSF’s facility at DHQ Hospital. “They use black tea and green tea as go-to remedies for everything, from burns and cuts to feeding babies. Arish’s condition is critical.”
Normally after a baby is born, they lose around 10% of their body weight in the first week. In Arish’s case, he lost 50%. When Malaika realized there was something wrong with Arish, she took him to a private clinic before bringing him to MSF.
On day six, Dr. Farman, a paediatric consultant with MSF, advised that Arish’s parents receive counselling to prepare them for the worst. A few hours later, Arish passed away.
In Pakistan, thousands of women and infants die each year from medical conditions that are easily preventable. In the south-west province of Balochistan, which has some of the worst health statistics in the world, the situation is particularly dire.
In 2018, rates of malnutrition in Balochistan prompted the provincial authorities to declare a nutritional emergency. Earlier in the year, a National Demographic and Health Survey found that 47 percent of children in Balochistan showed evidence of stunting, a condition resulting from impaired growth and development that children experience as a result of poor nutrition, repeated infection, and inadequate psychosocial stimulation.
Médecins Sans Frontières / Doctors Without Borders (MSF) is one of the largest international healthcare providers in the province. MSF provides obstetric and gynaecological care to mothers, and paediatric and newborn care to their children. MSF teams treat over 11,000 malnourished children a year across four districts. A lack of knowledge about nutrition, weaning and breastfeeding mean that harmful health practices are an important concern for MSF’s medical teams.
“Malnutrition is a serious issue that is exacerbated by poor health-seeking behaviour, a lack of social protection, extreme poverty, conflict and displacement. It must be addressed in a holistic manner that extends beyond MSF’s mandate,” said Pylypenko Tetyana, medical coordinator for MSF in Pakistan. Health seeking behaviour is how a community utilises health services and this can be influenced by the cost of services, distance to health facilities, cultural beliefs, level of health knowledge and inadequate facilities.
MSF’s health promotion and counselling teams work hand-in-hand with medical teams, conducting regular awareness-raising and counselling sessions to educate people about their health and discourage them from following practices that are medically unsafe.
In Chaman District Headquarter Hospital, 130 kilometres north of Quetta on the border with Afghanistan, MSF supports medical services for women and children, including reproductive, neonatal and paediatric healthcare. MSF medical staff offer free, quality medical care to local residents, Afghan refugees and patients who cross the border seeking medical help.
----------------------------------------
Since 2007, MSF has been supporting a 24-hour delivery room including surgical management of complicated deliveries, a paediatric inpatient ward with neonatal care, and an emergency room for trauma cases. Malnourished children under the age of five are also enrolled in a feeding programme (inpatient and ambulatory therapeutic feeding). Through health education sessions, MSF teams share knowledge on preventing medical conditions and seeking timely healthcare when needed, especially during pregnancy.
Tags