Idlib, the latest chapter in the never-ending war in Syria Abu Fadel, Hassan and Iman… all three are living in Idlib Governorate in northwest Syria. Like 2.7 million other Syrians, they’d been displaced within the country several times, and some of them ended up in Idlib. The last rebel stronghold, bombed in massive airstrikes led by the Syrian army and its allies, Idlib has become home to a population nine years of war have left shattered, impoverished and without hope for the future. Their backs against the Turkish border, Abu Fadel, Hassan and Iman recount similar stories of everyday life­­—the interminable waiting, fear and horror of war in what is an open-air prison.

In mid-June, the airstrikes resumed in Idlib Governorate, the target this time the zone west of Maarat-al-Numan. Most people in opposition-controlled areas in this Governorate are living in poverty, and many have moved from towns to camps around Dana, Sarmada and Atmeh where MSF teams provide assistance. The displaced talk of an environment of corruption, crime and social violence, and the area where they have taken refuge continues to shrink with the passing months and the Syrian army’s relentless attacks.

In 2013, Syrian government forces laid siege to Eastern Ghouta, a rebel stronghold east of Damascus. In the summer of that year, the area was subjected to suspected chemical weapon attacks. After four years of siege, in 2017 Eastern Ghouta was one of the de-escalation zones supposed to halt the fighting. But airstrikes continued to be part of its inhabitants’ daily existence. Iman Oum Ziad and her eight children used to live there. Like many Syrians in Eastern Ghouta, she preferred to be evacuated to Idlib governorate, rather than staying put in an area under government control. "My sister-in-law died in the chemical attacks in 2013," she says. “We lived through the horror, the airstrikes launched day and night, the siege, and nothing to eat." The siege was total, and she recalls the days with no food and her mother’s death from lack of medication. 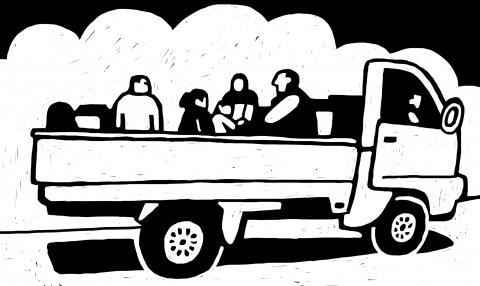 The 43-year-old woman remembers being displaced several times within Ghouta to escape the bombing. "From one day to the next, we fled from one place to another just to survive. We changed house six or seven times, and still the airstrikes kept getting closer." In February 2018, the Syrian army launched a large-scale aerial offensive and many people were killed. When Eastern Ghouta fell to the government, Iman refused to stay and, in April 2018, she and her family were evacuated to Idlib. “That’s a date we’ll always remember. It was when we had to leave the place we really loved. We’ve suffered terribly here and witnessed so much horror."

She, her husband and children took a bus to Idlib. They got off in Harem, and went to Saraqeb where they lived in a house for a while, but the rent was exorbitant. They were displaced once again to one of the many camps in the Governorate, where they’ve lived ever since.

“We don’t know where to go anymore. At any moment the airstrikes could start up again.”

Before the war, she looked after the house while her husband earned a living working in the fields helped by one of their sons. That son won’t be leaving Ghouta alive, because he was shot dead by a sniper while he was bringing bread home. None of the family is working now, and the economic situation is getting worse by the day. The value of the Syrian pound has halved since early May 2020, which is causing high inflation. The devaluation is the result of the crisis in Lebanon where most Syrians keep their savings, the US sanctions against Syria and crippling effects on the economy of the Covid-19 pandemic. Iman says there’s no going back. “As long as the regime’s in place, we can’t go back to Ghouta. They’ve made it clear that we’ll be imprisoned or executed if we do. No where’s safe anymore, not even in Idlib.”

The camp where they’ve taken refuge has communal latrines, almost no clean water, no electricity and, because of Covid-19, for the past two months no school for the children. She continues, “In any case, with the fighting and airstrikes, they don’t go regularly. I’m trying to teach them what I know. They already missed out on almost two years of school when we lived in Ghouta.”

Two of Iman’s daughters stayed in Eastern Ghouta. They have infrequent telephone contact—voice messages—, but everyone is too afraid to call and be arrested by the government forces. "My whole family is split up. Some are in Idlib, and others in Eastern Ghouta. It’s all fallen apart."

She recounts her 10-year-old daughter Jana’s panic whenever she hears planes in the sky. "I used to take them to hide in the bathroom or under the stairs. Jana cries for no reason, and she's always sad. She tries to reassure me, but I can see she’s not ok." Jana draws the horrors of the war and the planes endlessly. "After the siege of Eastern Ghouta, we're under another siege, this time here in Idlib." 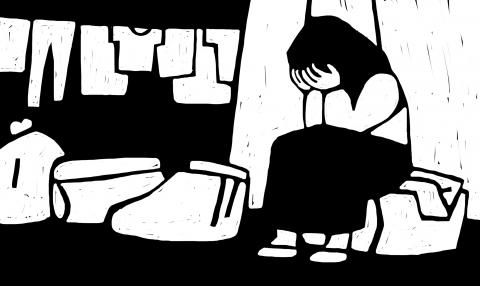 “We continue to hope, but that’s precisely what’s killing us”

Hassan Abou Noah was a student in Talbiseh in Homs Governorate. A journalist, he took part in the protests. “It was my duty to resist,” says the 33-year old. During the negotiations between the government and the opposition, he was evacuated to the Khan al-Assal region in Aleppo Province. He stayed there for a year but, at the end of January 2019, the airstrikes intensified and he was forced to flee.

“People were scared. It was like I was in slow motion. I could see everyone around me running, but I felt numb. We jumped into a car and took off. We were bumper to bumper, like a procession of ants.” The planes continued to drop their bombs on the zone as the population fled to Idlib, one passing just 50 metres over Hassan and his sons’ heads.

Hassan has lived in the town of Idlib since 2019. He’s staying with a friend who has his own house because he can’t afford to rent, and his wife and children are with relatives in another village. There’s not enough accommodation in the town for everyone, irrespective of whether they have money. “I look at Idlib, and I see a depressed town where there’s no hope.” Prices are exorbitant, as trade with the outside world is impossible. The Governorate is completely isolated. “The paralysis and the sadness are the same in the camps as in the town.” Idlib has no running water either, so it has to be bought and, like everything else, it’s expensive.

“I’ve experienced every emotion that exists. I’ve been frightened, I’ve thought that perhaps all this is in fact normal, I’ve felt empty and, on the odd occasion, happy. Now I wonder if I’m not hooked on the situation. We used to be scared when we heard bullets whistle. Here, we hear the planes and the airstrikes and start talking about something else.”

Hassan’s relatives and friends who stayed in Talbiseh have told him that men of fighting age are scared to go out because they could be forcibly conscripted into the Syrian army. 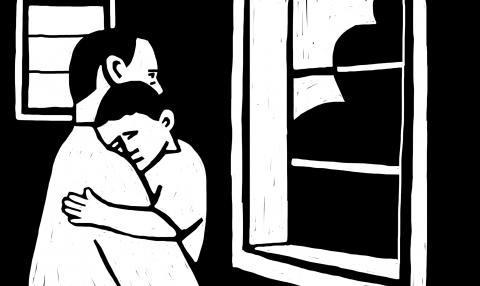 Every time his youngest son Adam hears the airstrikes, he asks his father if it’s thunder. His dad says it is.

“I don’t want to leave Syria. All I want is to live with my family under the same roof. Nobody knows what’s going to happen. Politically, nothing’s clear and neither are our lives. We continue to hope, but that’s precisely what’s killing us.”

Leaving Syria means paying people smugglers to get to Turkey—around 12,000 dollars for all of Hassan’s family. “I could always sell my kidneys,” he says, laughing.

“We’re trapped here, and there’s only one way out”

Abou Fadel was born and grew up in Idlib Governorate, in the village of Talmenes five kilometres from Maarat Al Numan. He’s spent the past six months living in a tent less than 20 metres square in a makeshift camp west of Idlib town with his wife and five children, whose ages range from 4 to 15. 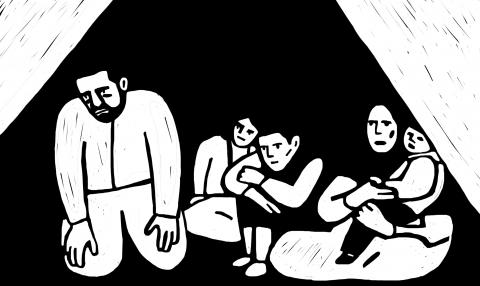 “Instead of asking how I manage to survive, you should ask me if I’m surviving,” the 40-year old exclaims. The answer is no. I borrow money from friends and relatives without knowing when I can pay them back, or if I’ll even be able to before I die. We’ve received a few donations from aid organisations, but nothing regular.”

Every now and again, he closes his eyes and imagines himself back in Talmenes, the village where he was born. He’s playing with his children near his parent’s two storey-home. His dreams and aspirations gone, he just wants to go back to before 2020. “I’ve forgotten almost everything about my life before the war. I just want to go back to last year, when the regime bombed us from time to time. At least then there weren’t ground troops threatening us,” he confides. “I wake up in a state of permanent anxiety worrying about my kids. They haven’t been to school since we left home. They loved school. Yesterday, I decided to marry my youngest daughter Safa to secure her future. She’ll be with her husband soon, which is the best that can happen to her.”

Early this year Abou Fadel and his family had to flee the airstrikes launched against Talmenes. “The airstrikes went on for five days, and then it was the ground troops. That was when we decided our only option was to leave. We escaped on a truck with dozens of other families to the town of Idlib. We spent a week in a mosque and then set up this camp here.” 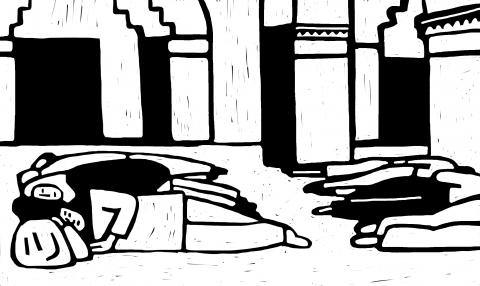 In June 2020, due to the fighting more people have been displaced in the south of Idlib Governorate and north of Hama Governorate. “The Syrian regime considers everyone living in Idlib terrorists. My cousin was arrested in Hama going to withdraw cash. He’s never come back. With the troops advancing on the ground, the best-case scenario is I’ll be forcibly enlisted into the army. And the worst is I’ll get thrown into prison!”

The tent the family lives in is a freezer in the winter, and an oven in the summer. Abou Fadel spends his days walking around the camp and drinking tea with his neighbours. If the situation becomes even grimmer, they’ll seek refuge as close as they can to the Turkish border, where he believes it’s safer.

“We’re trapped here, and there’s only one way out.” 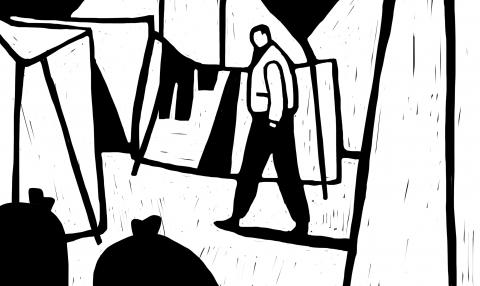