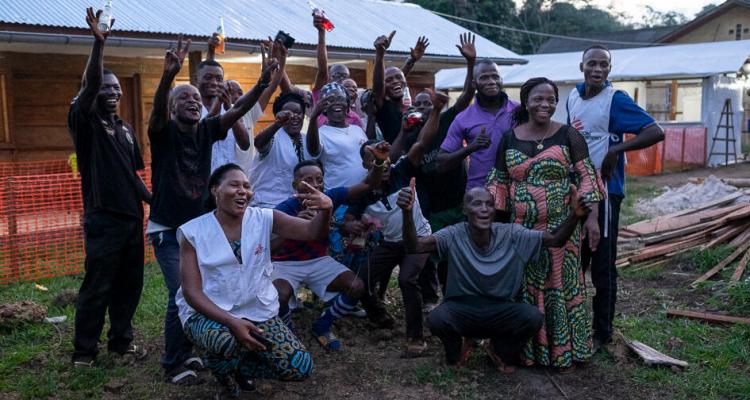 MSF teams celebrate with teams from the Congolese Ministry of Health the handover of the Ebola Treatment Centre (ETC) built by MSF at the Lotumbe General Reference Hospital, in anticipation of the probable end of the epidemic and MSF's withdrawal. ©Caroline Thirion/MSF The Ebola outbreak in Équateur province, northwestern Democratic Republic of Congo (DRC), has come to an end almost six months after it started thanks to an improved approach to patient care, said Médecins Sans Frontières (MSF).
The outbreak, the eleventh recorded in the country’s recent history, spread relatively slowly after it was declared on 1 June 2020, despite the fact that as many as 13 out of 17 health districts in Équateur province reported confirmed Ebola cases. According to the Ministry of Health, 130 patients were reported as having been infected, of which 55 people died. The 42.3 per cent mortality rate was significantly lower than the 66 per cent observed during the previous outbreak, which occurred in northeast DRC between August 2018 and June 2020 and claimed the lives of 2,287 people.
The introduction of the latest medical tools, including vaccines and treatments, the strengthening of community-based surveillance and a decentralised model of patient care all contributed to the rolling out of an effective intervention in areas that are often difficult to reach.
“We took advantage of lessons learned during the previous outbreak,” says Dr Guyguy Manangama, MSF emergency manager. “These allowed for a better management of the situation in Équateur, though the two contexts are different.”
“During the tenth outbreak, our intervention sometimes faced challenges in terms of its acceptance by people because it was too centralised,” says Dr Manangama. “This time, we favoured a decentralised approach and kept people informed at all times about the intervention and the surveillance mechanism, to improve access to healthcare in the region.”
MSF had responded to the emergency since the beginning of June in the areas affected by the outbreak. Our teams supported the local healthcare system and offered treatment for other diseases such as malaria and acute malnutrition. We adopted innovative strategies, including providing care through fixed sites and mobile clinics in our response.
More than 1,450 consultations were carried out across 28 health centres in five different health districts, among those that reported Ebola cases or had unexplained deaths in the community. Local medical staff were trained on the treating the disease and donations were made to support local health centres.
New medical tools, including vaccines and curative drugs, to prevent and treat the disease also contributed to improve the quality of response. These tools, as well as the adaptation of the medical response to the specific conditions on the ground, are the results of experience accumulated during previous outbreaks. Their ultimate purpose is to produce a better, more integrated and accessible Ebola response in future outbreaks.
Tags