Patient Stories from the Democratic Republic of Congo 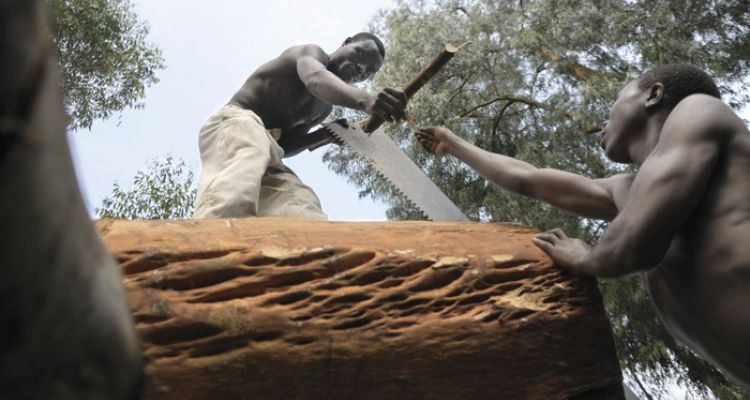 Nizeiyman, 21 years old, fled to the outskirts of Kitchanga in North Kivu Province when his village came under attack. He has joined the group of woodcutters in Mungoti camp for displaced people. They have pooled their resources to buy some basic woodcutting equipment. By selling planks they earn just enough to supplement the food handouts from aid organisations and provide themselves with a sense of independence.

“My name is Nizeiyman. I come from Butare. My father died in the war. Three of my brothers were killed, too. After that, I fled to the camp of Mungoti. I’ve been living here for two years now - I was one of the first ones who started the camp. I couldn’t bring anything with me; even my blanket was given to me here.

“I'm terrified - all the gunshots I heard and all the blood I saw. There were lots of gunshots and when we fled we had to jump over dead bodies to get away. I saw five bodies with my own eyes, and my three brothers too. Some were killed by bullets, some by machetes. I saw my brothers' dead bodies and I was frightened. When we saw that, we fled this war. We fled for our lives and came here to this camp.
“I had just recently married when we had to flee. My wife became pregnant and gave birth here in the camp. When I saw that there wouldn’t be enough to eat I came and joined this group of woodcutters. Most days I work in other people’s fields, and also do this work as a woodcutter. We sell planks to buy food. If there’s anything left, we buy another tree to saw.

“I live with my mother. She is a widow and so when I work I have to feed her as well as myself. Whatever I earn, I share it with my mother. The only income we have is from selling wooden planks. We have lived through some terrible things. But here we found a little bit of stability in the camp. Some humanitarian aid groups gave us food and cooking pots. We have a little to eat, but we realized that we'd need to supplement that with our work as woodcutters. And so we keep on working.”

MSF runs an extremely busy mental health programme in Kitchanga. Many of the people they see are women who have suffered physical or sexual violence. This 54-year-old woman recounts what happened to her a week before first coming to see MSF:

“When armed groups started coming to our village, we would spend the night in the bush. They always came at night, and they would beat everyone. My husband was badly beaten, and some people even died from beatings. When we saw that they were coming every day, we left our houses, and we were like animals living in the bush. When they saw that we weren’t sleeping in the village any more, they started to hunt us down in the bush. If you had nothing to give to the bandits, you’d be killed. Every day people would talk about someone they knew being beaten or stabbed to death. The bandits said that the forest belonged to them, not us. They told us that the night belonged to them, too. So we gathered all our possessions and came here to the camp.”

“Since then, I’ve been living here in the camp. One day I was out with a group looking for food, when we heard gunshots coming from all sides. We ran, and dispersed into the woods. I was with two young people and they were killed right there in front of me. As I threw myself to the ground they were killing the people behind me. They kept chasing, firing their guns. I fell to the ground, and when they caught me, they raped me. When they had finished, one of them made to shoot me, but the others stopped him, and cut me with knives instead. Now I have cuts all over me, even on my legs. When they had finished, they were about to kill me, but one of them said not to. “

“My heart is always beating too fast. I’m terrified whenever I go to collect food – how could they do this to me? There are so many people here getting wounded that I’m still frightened they might kill me. The day before yesterday some women went to dig for roots in their fields. They were chased away with bullets and the bandits took everything they had gathered. No one now dares to return home.”

“I have given birth twelve times. Eight of these children are already buried. I spend sleepless nights and then I’m tired in the mornings. I think about many things. I think about the people I’ve lost and those who are still around. I think about my children who have died. I think about my child, who is still missing, and I don’t know whether he’s alive or dead. Whenever I’m with my friends I end up talking about the rape, about what happened to me. They help me, giving me food sometimes, and if they can’t give me anything, it’s because they don’t have anything themselves. Some of my friends have given me cups to drink from, food to eat, or a wrap to wear. And one woman who suffered the same things I did told me to come to see MSF. As soon as she told me about MSF, I came straight here.”