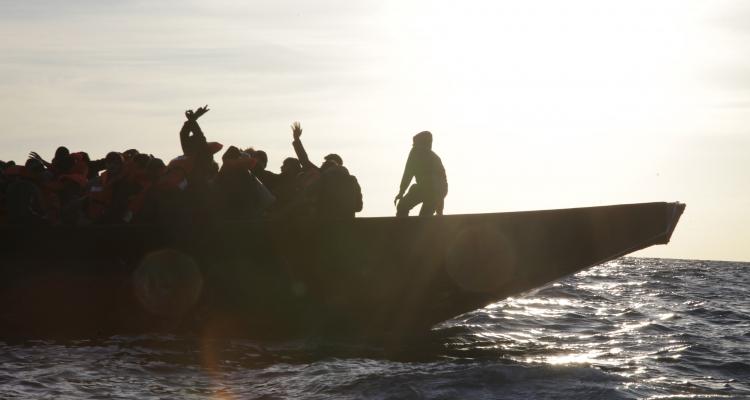 Médecins Sans Frontières (MSF) teams have carried out six separate rescue operations in three days on board the search and rescue ship Geo Barents and rescued 439 people from the Central Mediterranean Sea who had fled Libya in search of safety.

After two requests for a place of safety to the Maltese authorities were ignored and then denied, MSF is addressing Italian authorities for a port. The Geo Barents needs to urgently disembark these 439 survivors in a place of safety, where they can begin to receive the assistance they need with respect and dignity.

The Geo Barents began its seventh rotation in the Central Mediterranean on 14 January, leaving the Sicilian coast and travelling south to the Libyan Search and Rescue (SAR) zone.

Around midday on 19 January, while in the Libyan SAR zone, the team monitoring the sea from the bridge of the ship spotted a white rubber boat in distress. The Geo Barents immediately changed course towards the boat and the rescue team brought 87 survivors safely on board.

At dawn on 20 January, after receiving an alert from crossing support hotline Alarm Phone of a boat in distress some seventeen nautical miles from the Geo Barents, MSF teams rescued 109 people. They had left Sabratha, Libya, in a rubber boat the previous evening.

Following another alert from civilian aerial reconnaissance organization Pilotes Volontaires the same day, the Geo Barents reached the Maltese SAR zone, where a dark grey wooden boat was noticed from the bridge. A total of 100 survivors were rescued from the boat, having spent almost a day at sea. Later that day, at around 10 pm, another 67 people were rescued from a wooden boat in distress and brought safely onboard the Geo Barents.

MSF teams located another rubber boat in distress in the early morning of 21 January, while monitoring the southern area of the Maltese SAR zone. It had 55 people on board, who were immediately rescued and brought on the Geo Barents.

The sixth and final rescue in less than three days occurred about 11 am on the same day, when our teams spotted and rescued 21 people from a small fibreglass boat.

Among the 439 survivors on board the Geo Barents, many come from Eritrea, Bangladesh, Pakistan, Sudan and Egypt. The majority are men, 112 are minors and most of them travel unaccompanied. There are also 9 women and 3 very small children, the youngest of them is under one year old. They’ve all left Libya and traveled for many hours on unseaworthy boats, risking capsize and shipwreck.

Jimmy (name changed), 24, survived the shipwreck and he’s now on the Geo Barents. He told MSF that he spent a year and a half in Libya and attempted to cross the sea four times.

The third time they [the Libyan Coast Guard] caught me at sea and I was taken to prison. [The guards in the prison/detention centre] told me that I had to pay to be freed. [In the detention centre] I had just one piece of bread to eat per day; they gave us the toilet water to drink. They force us to call our families to ask for ransom and they threaten to kill us [if they don’t pay]. Libya makes you mentally ill, and you have no idea how to get out of there.

MSF medical teams have offered medical care and psychological assistance to everyone on board. Some survivors have required medical attention for mild and moderate signs of hypothermia, general body pain, and seasickness due to the rough weather conditions during the last few days. Several people are also receiving medical treatment for malnutrition.

"The survivors have no serious medical concerns, but many are suffering from the physical and psychological effects of their time in Libya, where they were victims of extreme violence," says Alida Serracchieri, MSF medical team leader on board. "A man arrived on board the Geo Barents with a wound on his head that required stitches, telling us that he had been assaulted by Libyan authorities. They are all exhausted. They need a place to disembark safely, to recover and receive adequate assistance."

Hager Saadallah, the psychologist on board, says many people are experiencing psychological distress after surviving traumatic events in Libya, along their routes and in their countries of origin, and that their mental health state is now deteriorating after several days on the ship.

The most common symptoms I've assessed are psychosomatic pain, anxious overthinking, sleeping issues, traumatic flashbacks and generalized distress. The living conditions on board can potentially lead to a further deterioration of these symptoms: anxiety and tensions are rising due to the uncertainty about their future. The work of processing their trauma can only start once survivors are in a safe and secure environment on land.

- Hager Saadallah, psychologist on board