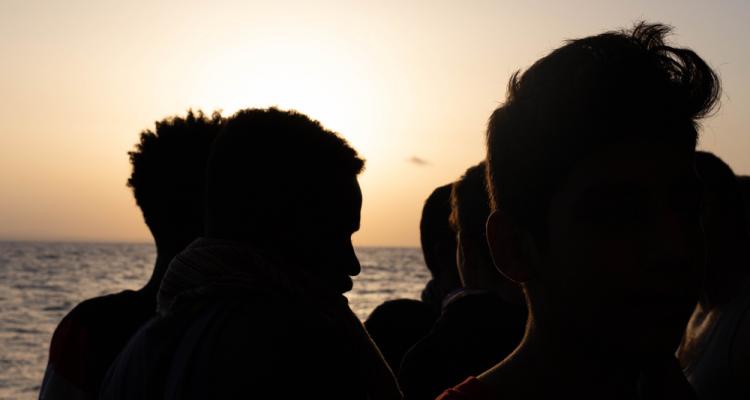 Twenty-six survivors of a shipwreck in the Mediterranean Sea have received psychological first aid from a team from Médecins Sans Frontières/Doctors Without Borders (MSF) after arriving in the Sicilian port of Pozzallo on 12 September.

The survivors, all Syrians and Afghans, left the coast of Turkey on 28 August in a small boat. After the boat’s engine failed, they drifted at sea for 15 days. Supplies of food and water soon ran out and for the last seven days they had nothing to eat or drink. Six people died, including three children, one of whom was an 11-year-old travelling without parents.

After seeing several people die on board, "we all wondered when our turn would come," said one survivor. "We started praying in preparation for death. One person covered his face with whatever he could find. He was preparing to die. He gave us the little money he had in his pocket, asking us to donate it on the mainland to those who really needed it. We uncovered his face and said to him: 'You will survive, we will not die'."

"On board with us, there was a man with two very young children who were close to dying of hunger,” said another survivor. “So I offered them my food to keep them alive. But despite the food, the children didn't make it and they died. At one point, my wife felt very weak too, and I was convinced she was going to die. I thought about the food I had given those children, which hadn't saved them, and which could no longer feed my wife. I didn’t regret my action, although I did think that perhaps I could have saved my wife with that food. I covered my face with a shirt so no one could see me crying."

The engineless boat drifted towards Libya, its passengers fully exposed to the sun. After the first few days, supplies of food and water ran low. "At one point, one of us found an almond in his pocket. We decided to divide it but I almost choked on that half almond and I couldn't keep it down," said an Afghan young man.

"In desperation we started drinking sea water, trying to filter it with our clothes,” said a Syrian man, who worked as a mechanic in Turkey before making the decision to leave for Europe for the sake of his wife and children “We mixed it with toothpaste to sweeten it. We drank the engine water out of desperation. I knew that we could die from drinking that water, but we had no choice."

Some people on board needed water to swallow lifesaving medicines. "Look how many pills I had with me," said a man with epilepsy. “I couldn't take them because my throat was so dry that I couldn't swallow."

One of those who died was an elderly woman suffering from hypertension. It is not known if her death was linked to not being able to take her medicine.

The dead also included a Syrian man who needed medical care but was unable to see a doctor in Turkey. This is what prompted him and his daughter to leave after several years in the country, where his daughter worked as an interpreter in a hospital.

The bodies of those who died were dealt with according to religious traditions and then rolled overboard. "After three or four hours the bodies of people who didn’t make it began to smell because of the sun and the heat,” said a survivor. “We prayed, we washed their bodies with seawater, we tried to cover them with what we had, in accordance with religious traditions, and then we let them go to the sea."

As they drifted in the small boat, the survivors were passed by a number of larger vessels. Each time this happened, their hopes were raised that they would be rescued, but instead they found themselves ignored. "Our hope disappeared every time people with water and food at their disposal decided not to help us,” said a survivor. Just one ship approached the small boat. The crew threw some food and bottles of water in their direction, but the supplies hit the water far out of their reach before sinking under the waves. "So for the umpteenth time, our hopes of being able to survive were dashed,” said a survivor.

After 15 days at sea, the remaining survivors on the small boat were finally rescued by a merchant ship, then transferred to an Italian coastguard vessel, which took them to Pozzallo.

"When the merchant ship was close enough to us, I jumped into the water," said a survivor. "I don't know where I found the strength, but I jumped to try to reach that boat. While I was in the water, I met the gaze of a person on board and, from the look in his eyes, I realised that he had a heart. He was from Eastern Europe, a Ukrainian I think. That's how it happened, the ship turned around and helped us. They gave us eggs, potatoes, vegetables and water. We were finally saved.”

Despite having survived the ordeal, some people felt continued fear rather than relief. “After all this horror, I am scared that I will be sent back and that all the suffering on the journey will have been pointless,” said a 17-year-old boy.

Since the beginning of this year, more than 1,000 people have died or are missing in the Mediterranean and more than 15,000 people in small boats have been intercepted by the coastguard and returned to Libya, although the true numbers are probably much higher.

This tragedy on Europe's doorstep is the concrete consequence of European political decisions that protect borders, rather than human beings, says MSF, and this is deeply unacceptable. MSF calls on European states to stop ignoring their responsibilities and to restore a search and rescue system at sea.