Over the past 20 years, there has been an increase in chronic kidney disease of unknown origin (CKDu), also called as Mesoamerican endemic Nephropathy (MeN), in agricultural communities in Central America.

It affects predominantly young male agricultural workers who are exposed to extremely demanding physical conditions and high temperatures; males with no clinical history of chronic diseases.

Even if there are not specific factors identified for the development of this pathology, MSF staff in La Gomera, Guatemala, have observed that some of the patients affected share certain characteristics such as combining medication with analgesic properties (painkillers) with energy drinks – with the goal of having a better physical performance at work, but this may cause a very fast deterioration of their kidneys. In addition, this community is experiencing poor living conditions, lack of potable water, food insecurity, and other factors.

Doctors Without Borders/Médecins Sans Frontières (MSF) carries out activities to detect and provide medical support for this community, continuing to find people with mesoamerican endemic nephropathy at late stages. Patients frequently have to travel to Guatemala City for haemodialysis and need palliative care for pain control, but most of the time they do not have the financial resources for an adequate treatment.

The following testimonies are from patients in the late stages of illness. In spite of their difficult conditions, they continue fighting against this silent disease.

I didn´t know that I was sick, I found out because I was cutting sugarcane and a snake bit me. At the beginning my peers and I didn´t think it was serious but when they took me home I couldn´t speak, I lost my sight and couldn´t recognise anyone.

I was hospitalised for 28 days in Escuintla, but nobody knew what I had. A doctor from another state checked my exams and put in a catheter, that´s how I began to regain consciousness. I was connected to a machine and my blood or something was flowing through a hose, I was so thin that I couldn´t even hold myself up, not even to go to the bathroom. When I arrived home, I used to cry and pray, I asked God for help because I couldn´t walk, I could not do anything, and we had spent all our money at the hospital. We had to sell all our stuffs – a chicken, two phones, a television, a bedspread.

We sold everything… we don´t have anything.

Now we live in a place that we borrowed, and thanks to some friends who meet Doctors Without Borders/Médecins Sans Frontières (MSF) and told them about me, they visit me give me medicines and I feel better. I don´t sleep all day anymore and sometimes I go to cut firewood to sell it and get money for food or for travellig to the capital for haemodialysis, because they don´t give me work on the farms and I have to find a way to get ahead.

Everyone was already crying, they watched over me at night. I would tell them, “Let me die because seeing you like this, I can´t rest”.

For 16 years I worked as a sugarcane cutter, a hard job but well paid. One time, six years ago, I was cutting sugarcane and I started to feel nausea and a stomachache, so I bought medication to continue working, but in a few days, I felt bad again. I didn´t go to the doctor or take too much notice because I didn´t have money and I used to think that something had gone wrong.

Over the years, work was very difficult for me, I felt suffocated, tired, and threw up everything I ate. So, I started missing work… until one day I couldn´t go anymore. It was very sad and difficult for me because I couldn´t do anything, if I walked, I felt suffocated. I tried to sell firewood but I wasn´t able to collect it either. One day I was talking with a woman in the church and she told me that maybe I was sick from my kidneys because my feet were very swollen. But I didn´t think about that because I had no pain in my back, it was just the vomiting.

There was a moment that I couldn´t speak anymore, my family cried and watched over me at night. One time I had my grandson lying on my chest and I felt a deep breath, my whole body relaxed…I felt like I was leaving…Then my grandson started to cry very loud and wake me up. He saved me! In that moment I thought that God was giving me another opportunity, so I asked my wife if she wanted to marry me. 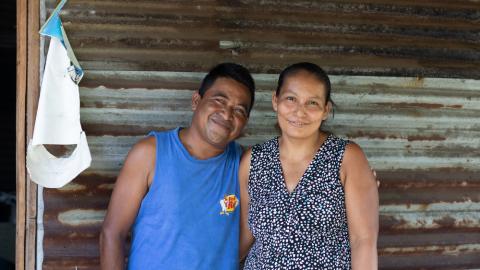 That same afternoon my brother came and took me to the doctor. He examined me and gave me medication, but I did not get better. We looked for another opinion and a new doctor asked for new tests. That´s how we knew I was sick from my kidneys and I needed haemodialysis, so my brother took me to the hospital in Escuintla.

Now I feel better. Sometimes I repair a small room because I want to work, I want to be useful. I have already asked MSF if someday I would work again, they said that little by little I will regain strength, that I must follow the treatment, eat well and go to Escuintla for the haemodialysis. It’s difficult because sometimes we don´t have money to travel to Escuintla but we still have hope that someday I would be better, and I would work again.

My child was 12 years old when the doctor told us that his kidneys were not functioning.

Andrés has always been very unhealthy. Since he was very young, he suffered from bronchial tube issues and was under constant medical treatment. On one occasion he even convulsed because the fever was too high.

When he was older, he was in high school and started to feel very sick, he had high fever and began to swell. As we didn´t know what was wrong with him, the school´s director made a collection of money to give him some tests. At first, the doctor told us that Andrés had severe anemia and gave him medication, but he didn´t get better so we decided to look for another opinion. The other doctor from La Gomera recommended we take him to a specialist, so we went to Guatemala City.

The specialist tested him and told us that Andrés needs haemodialysis because his kidneys were not functioning. I asked why he was so sick if he is just a boy of 12 years old and he answered that probably the medications he took as a child had been too strong, and there are many other factors why he probably developed the disease.

We were very worried because I am alone, his father left us, and we have had to find a way to get ahead. Now, four years have passed and Andrés is well some days but other days he isn’t, but we remain hopeful that he will get better.

Since 2021, Doctors Without Borders/Médecins Sans Frontières (MSF) has been in La Gomera, La Democracia and Sipacate, in Escuintla, in Guatemala, working on strengthening the health system for prevention, early diagnosis, treatement and surveillance of chronic kidney disease of unknown origin (CKDu), so called mesoamerican endemic nephropathy (MeN).