Responding to COVID-19 in conflict-affected eastern Ukraine
5-9 |  The only European country facing an armed conflict, Ukraine's healthcare system was already under great strain, especially in the east where sporadic hostilities have left many struggling to access healthcare. The spread of COVID-19 threatens to further overwhelm the country's healthcare capacity. 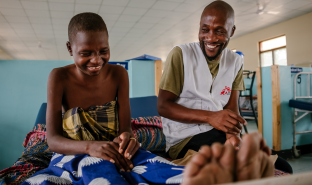 New model of care aims to reduce deaths among advanced HIV patients
12-2 |  Despite having taken huge steps to reduce the prevalence of HIV and the numbers of people dying from it, many people in Malawi still get sick and develop advanced HIV. But a new model of care could help communities spot the symptoms of HIV and speed up the referral process, so that HIV positive patients receive care quickly and effectively.