In Abyei, Sudan, women and children pay the heaviest price of the lack of healthcare
1-5 |  Since 2006, ,MSF has been providing much needed primary healthcare in the troubled Abyei region. Intervening in this tense area has become more and more difficult. But needs remain huge. In south Sudan, maternal and child mortality are among the highest rate in the world. Here is the story of one mother whose baby would have died without proper care. 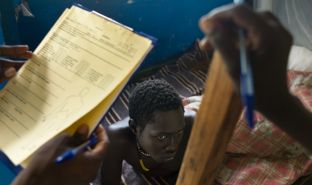 Kala Azar patient testimony – Malakal hospital, southern Sudan
12-21 |  My name is Thinjin Wal and I have four children.  Three of my boys are here at the Malakal Hospital and have all been receiving treatment for kala azar.My youngest boy, Deng, is 2 years old.  He became very sick in September with a very high fever that lasted many weeks. He was vomiting, had diarrhoea, and became very thin.  I brought him to our closest health clinic in Baliet from my village, Abong.  There they told me he had malaria so he was given medicine for malaria but it did not help him.  Then they treated him for typhoid. That failed too.