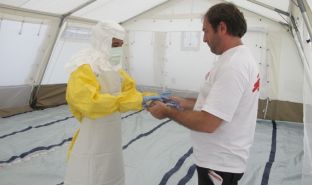 Response to the Ebola epidemic in Uganda moves forward
8-10 |    The response to the Ebola epidemic that broke out at the end of July in Western Uganda is moving forward thanks to the joint effort of MSF, the Ugandan Ministry of Health and other bodies. In approximately one week, the MSF emergency team has set up an Ebola treatment centre, has isolated the patients that have contracted the virus from suspected cases and has implemented a protection system for the health staff, the most vulnerable group in these types of outbreaks.

Uganda Ebola outbreak: MSF sets up treatment centre in Kagadi
8-5 |    An emergency team from MSF has set up a treatment centre for Ebola in Kagadi, western Uganda, where 24 suspected cases have already been admitted. So far the outbreak has claimed the lives of 17 people. MSF staff have also put in place control measures to prevent the epidemic spreading further, and to protect the local community and health workers. 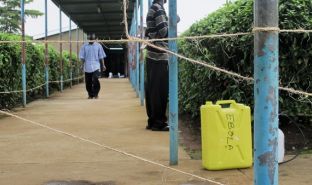 Ebola outbreak in Uganda: Interview with the emergency coordinator
8-2 |    Outbreaks of Ebola are rare, but for Dr. Olimpia de la Rosa, MSF’s emergency coordinator, dealing with the disease is nothing new. The last time Ebola hit Uganda, in 2007, she supported an MSF team fighting the outbreak. Five years later, MSF’s emergency response is again in full swing as teams help to combat the spread of the deadly virus.What is the current situation in Uganda and how many people are affected? 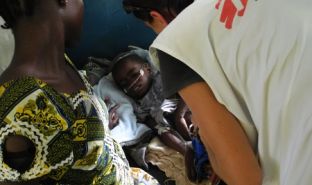 MSF team fights Ebola outbreak in Uganda
8-1 |  An emergency team from Médecins Sans Frontières (MSF) is in Kigadi, in western Uganda’s Kibaale district, to help fight an outbreak of the Ebola virus. Other MSF teams in Uganda are closely monitoring the situation. The Ebola outbreak, confirmed by Ugandan government on 28 July, has killed at least 14 people, while at least 20 more are thought to be infected.