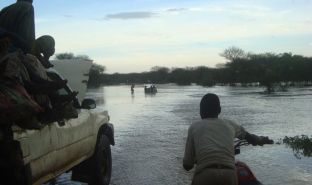 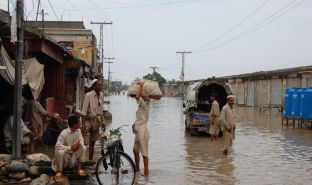 Pakistan floods - 9 August
8-9 |  New rise in water levels delays aid effortAs new areas of Pakistan get affected by floods daily, the zones that had received the first blow suffer fresh water level rise. Continuous and sometimes heavy rains that fell on Khyber Pakhtunkhwa and Baluchistan provinces have significantly impeded on humanitarian and medical aid. As MSF teams on the ground battle to deal with the consequences of the initial floods, more MSF staff are now assessing the needs in the newly affected provinces of Punjab and Sindh. 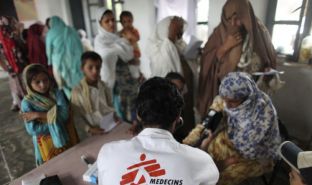 Pakistan Floodings: As more rains loom, MSF increases activities and assesses new areas
8-6 |  “Catastrophic” situation found in Charsadda and Nowshera districtsAlthough water is receding in some areas, the needs of people who have had to leave their homes are increasing and becoming more and more urgent.MSF’s response is increasing and focusing on providing drinking water, basic relief items and medical care.

Pakistan floods - 5 August
8-6 |  Official figures now speak of more than 3 million people having been directly affected by the floods, and more than 1500 confirmed deaths. More rains are expected in the coming days and could cause renewed flooding and create problems in areas that have up until now been unaffected. But some areas initially affected are becoming more accessible thanks to the water receding.

Pakistan floods – “We are far from having a complete picture of people’s needs”
8-5 |  Dr Awais YAGUB is a Pakistani doctor and an MSF deputy medical coordinator in Pakistan. He is currently working in Charsadda, one of the districts hardest hit by the floods.What is the situation like today in Charsadda district?