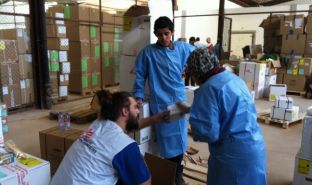 MSF supports to health facilities in the Middle East and north Africa
3-24 |  Ever since civil unrest and violence erupted in countries across north Africa and the Middle East, teams from Medecins Sans Frontieres (MSF) have been supplying and assisting hospitals and health structures where medical staff are facing increased numbers of injured people. Teams are also assisting people who are fleeing to neighbouring countries.Libya