Syria: Airstrike on market kills 20, injures 99
1-14 |  At least 20 people were killed and 99 were injured when warplanes bombed a market in Azaz, northern Syria on 13 January, according to Médecins Sans Frontières. Twenty of the wounded, all of them civilians, were treated in an MSF medical facility.The attack on the market in Azaz, near the Turkish border, was particularly devastating as it came just two weeks after airstrikes hit the city’s health facilities, making it almost impossible for medical staff to cope with an emergency on this scale.

Destitute civilians suffer intense bombing in Syria's Idlib province
1-10 |  In the north of Syria’s Idlib province, civilians are being made victims of a terror strategy carried out through intense and indiscriminate bombing, Médecins Sans Frontières (MSF) said today.

Afghanistan: MSF reopens Khost maternity hospital
1-3 |  Médecins Sans Frontières (MSF) has resumed medical activities at its maternity hospital in Khost Province, Afghanistan, which were suspended following an explosion in the hospital in April, 2012. The reopening follows the demonstration of strong support to MSF, and reassurance over the last few months by the local community and all relevant actors, enabling the organisation to resume its maternal healthcare services in the province.

MSF drastically reduces medical activities at Bangui airport following two days of violence
1-3 |  MSF has had to drastically reduce its medical activities in Bangui airport, following two days of shooting close to MSF’s clinic at the airport which has resulted in two young children being killed and 40 wounded arriving at MSF’s clinic .  MSF is now operating at the airport camp with a reduced emergency team, treating only the most severe cases and providing emergency referrals to other structures. 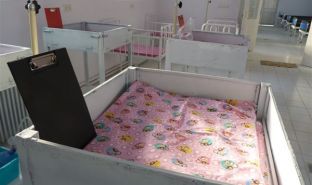 Afghanistan: MSF to resume medical activities in Khost
10-19 |  Médecins Sans Frontières (MSF) will resume medical activities in its maternity hospital in Khost Province, Afghanistan, which were suspended following an explosion in the hospital in April, 2012.The decision to restart medical services was made after a meeting, or jirga, on August 27 between MSF staff and leading community members, including representatives from all districts of the eastern province of Khost and prominent religious figures and scholars, who expressed strong support for MSF’s provision of maternal healthcare in the region.