Afghanistan: MSF opens surgical hospital in Kunduz
10-18 |  As violent conflict continues in northern Afghanistan, the international medical organisation Médecins Sans Frontières (MSF) has opened a 55-bed surgical hospital in Kunduz Province.  The hospital, which opened on August 29, provides urgent surgical care and follow-up treatment for people suffering life-threatening injuries.Fighting over the last year in Kunduz has led to large numbers of people who have sustained bomb blast, shrapnel, and gunshot wounds, and who are in need of specialized surgical care. 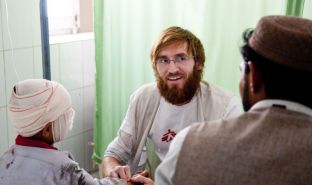 Afghanistan: Healthcare in Helmand
8-24 |  In recent years, Afghanistan’s Helmand province has seen some of the bloodiest and relentless fighting in the whole of the country. Large numbers of people have been displaced, and for most, accessing medical care remains a constant challenge. Faced with such enormous needs, Médecins Sans Frontières（MSF） commenced work at Boost hospital in Lashkargah, the capital of the province, a year and a half ago. The 155-bed hospital is now one of only two fully functioning referral hospitals in the whole of southern Afghanistan.

Afghanistan: MSF receives wounded following attack on military bus in eastern Kabul
4-12 |  Following an attack against a military bus in the suburb of Ahmed Shah Baba in eastern Kabul on Saturday, April 9, 2011, seven people with medium to severe injuries were treated in the emergency department of the Médecins Sans Frontières (MSF)-supported Ahmed Shah Baba Hospital.MSF medical staff worked with the hospital’s emergency room team to treat the wounded patients, who were suffering from blast-related injuries, including severe burns and open fractures.