MSF Open Letter concerning civilians fleeing Libya for Europe
5-19 |  (This letter was sent to Heads of State or Governments of Member States of the European Union, to Presidents of European Institutions, and to the offices of the UN High Commissioner for Refugees, the UN High Commissioner for Human Rights, and the International Organisation for Migration. It was subsequently published in national newspapers in countries throughout the European Union.)Thursday, 19 May 2011.

Interview with Dr. Morten Rostrup on the situation in Zintan, Libya
5-18 |  Since 30 April, an MSF team is working in the hospital of Zintan, a city located in western Libya, south west of the capital of Tripoli, in the Nafusah Mountain region. For weeks now, Zintan and the surrounding area have been the battleground between pro-Gaddafi forces and the insurgency, fighting over this region of strategic importance, resulting in clashes over the Tunisian border of Dehiba at the beginning of April. More than 40,000 Libyans are reported to have fled the region to Tunisia since early May. 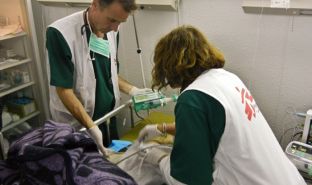 Libya - 16 May
5-16 |  The general situation in Libya remains extremely tense and uncertain. In the country’s third city Misrata, the situation is very volatile: after the rebels claimed to have captured the city’s airport on Wednesday 11 May, the conditions seemed to slightly improve in some areas but over the weekend, the city was the target of heavy shelling, killing at least 10 people and injuring around 20. However the hospitals continue to work at full capacity.

Libya: Letter from the field
5-9 |  Written by Alison CRIADO-PEREZ, Head Nurse on both MedEvac boat operations from Misrata to Tunisia:We had just returned from MSF’s second evacuation of war-wounded from the besieged city of Misrata to the safety of hospitals in Tunisia. I walked out onto the balcony and saw a small, blonde girl, dancing alone in the sunshine on the terrace below. The contrast was too much; I found myself bursting into tears.

Libya: Providing medical and surgical treatment to the wounded in Misrata
5-6 |  Even as the bombings continue, Médecins Sans Frontières (MSF) teams are ramping up their medical activities and have been performing surgeries in the northern part of the besieged city of Misrata.