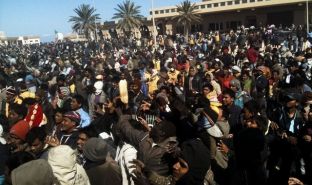 Libya: Aid access to violence affected area blocked
3-2 |  The international medical humanitarian organisation Médecins Sans Frontières (MSF) is demanding that parties involved in the conflict in Libya grant it access to violence-affected areas, including the dispatch of humanitarian supplies.On March 1, the MSF team in the eastern Libyan city of Benghazi received a plea for help from a medical doctor in the western city of Misurata, where clashes have reportedly left many people wounded. Like other areas in the west, Misurata has so far been inaccessible to aid workers because of insecurity.

MSF is supporting medical facilities in Benghazi (East) and reinforcing its medical teams to assist victims of violence inside Libya
2-28 |  Last Friday, the first MSF team was able to cross the Egyptian border, on the Eastern side of the country, and reach the town of Benghazi in Libya. For the past three days, the team has been assessing the situation in the hospitals of Al-Jalaa, Al-Hawari, 7 October and in the Benghazi Medical Centre (BMC) in Benghazi and surrounding area.

First evaluation of medical facilities in Benghazi, Libya
2-27 |  The first MSF team reached Benghazi Thursday evening. Three medical facilities were visited: Al Jalaa hospital, Al Hawari hospital and Benghazi Medical Centre (BMC). Each of them is well equipped and managed to deal with the wounded and medical needs. However, they are facing some shortages of medical material and drugs (consumables, dressing, sutures, anaesthesia drugs, external fixators).

Libya: Urgent priority must be give to doctors and medical materials
2-25 |  First MSF Team Arrives in Benghazi, More Doctors and Supplies on the WayWhile a Médecins Sans Frontières (MSF) medical team inside Libya attempts to reach health facilities trying to cope with high numbers of injured people, additional MSF teams with medical supplies, including necessary surgical materials, remain blocked from entering the country.

MSF team in Libya trying to reach areas affected by violence
2-24 |  An Médecins Sans Frontières (MSF) team of six has crossed the border from Egypt into Eastern Libya with a truckload of medicines and medical materials. The team is now travelling to areas where medical facilities have reported many wounded people as a result of violent confrontations.MSF is extremely worried about the situation and its staff are working tirelessly to reach areas of Libya where large numbers of people are affected by the violence.For now, insecurity makes it impossible to bring urgently needed humanitarian aid to Tripoli, Libya’s capital city.